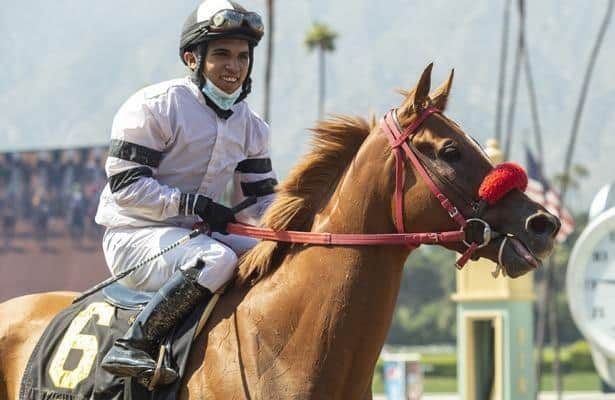 Ben and Sally Warren’s versatile homebred Warren’s Showtime, a three-time stakes winner on grass, relaxed beautifully early and despite the fact she lost considerable ground on both turns, rallied with big strides to take Sunday’s $150,000 Melair Stakes at 1 1/16 miles on dirt.

Ridden by regular pilot Jorge Velez and trained by Craig Lewis, the 3-year-old chestnut filly by red hot sire Clubhouse Ride got the distance in 1:44.29.

Breaking from the outside in a field of six sophomore fillies bred or sired in California, Warren’s Showtime was forced four-wide into the first turn as she sat fifth, about three lengths off of longshot pacesetter Reiwa, who was hotly pursued by favored Big Sweep and Smiling Shirlee.

A comfortable fifth while full of run and three lengths off the lead at the half mile pole, Velez bided his time and asked his mount for run leaving the three furlong pole, from where she wheeled four-wide turning for home and gained the advantage over Smiling Shirlee a sixteenth out.

“How sweet it is,” Lewis said. “She was much the best today. She was forced wide into the first turn and lost ground turning for home. I just talked to Ben up in Vegas and he’s elated.

“We’ve got her mother (Warren’s Veneda) back in foal to Clubhouse Ride and she’s got a yearling full brother and a Clubhouse filly by her side. This stud has been absolutely amazing, these foals are sound, versatile and they can really run. He was bred to 100 mares this year, so we feel really good about that.

Most recently third in the one-mile turf Fran’s Valentine Stakes on June 6, Warren’s Showtime was off at 4-1 and paid $10.60.

With Velez in the irons for all 10 of her starts, Warren’s Showtime, who is out of Ben Warren’s Grade 1 stakes winning Warren’s Veneda, got her fourth stakes win and her fifth overall.  With the winner’s share of $90,000, she now has earnings of $412,251.

“I feel really happy and I’m very grateful to Craig Lewis, the owners and all the guys at the barn doing a really good job with the horses,” Velez said. “I ride this filly very comfortably. She did a good job.”

Smiling Shirlee, who applied ample early pressure to Big Sweep, was all heart in defeat, finishing second by 3 ¼ lengths.