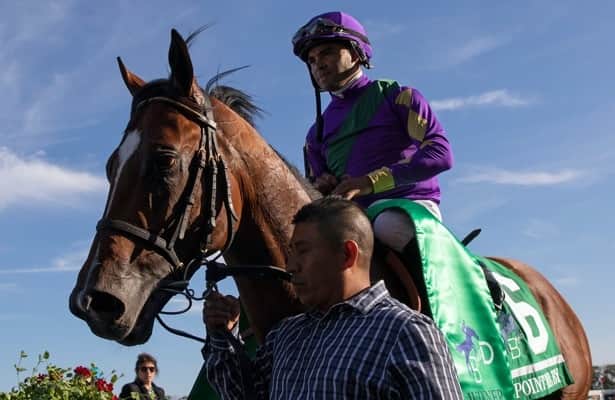 For Eddie Keneally and Point Me By, patience at 2 has been rewarded with Grade 1 success at 3.

The Point of Entry colt won Saturday’s Bruce D. Stakes (G1) – formerly the Secretariat Stakes – as the 17-10 favorite at Arlington Park. Point Me By’s victory came in his stakes debut and in only his third career start, all of which have come since June.

“Very exciting to win at Arlington in the final year, most likely, of the festival and of racing period at Arlington,” the trainer Kenneally said Sunday. “To win a race like the Secretariat and the history behind it – very, very satisfying.”

Point Me By trained steadily at Churchill Downs and Turfway Park from October to December 2020. But rather than race him then, Kenneally elected for time off.

“We’ve always liked him,” Kenneally said. “We just had to be patient with him. He had some minor baby issues at 2 which prevented him from racing.”

Point Me By returned to the work tab in May at Churchill and then made his debut there June 20, facing fellow maidens in a 5 1/2-furlong turf sprint. He closed from eighth that day to upset a 12-horse field at 14-1 odds.

Off that first-out win, Point Me By shipped to Saratoga for a July 15 allowance race. He faced older runners going one mile on the turf and performed well, finishing fourth of nine.

The Bruce D. Stakes made for an ideal spot off that Saratoga start. The turf mile came a month after his last race and, while offering a $300,000 purse and Grade 1 prestige, presented a field of rivals unproven at that level.

“It looked like we’d be one of the favorites if we were in there, and it turns out we were,” Kenneally said.

Under jockey Luis Saez, Point Me By sat in mid-pack early in a field of nine 3-year-olds. He pulled closer through the second turn, then shifted out and split horses as he surged forward.

Point Me By was bumped in the stretch when Tango Tango Tango, the second betting choice, came out. He shrugged off that contact and drew away to score by 2 3/4 lengths.

Point Me By "relaxed nicely with Luis Saez, who rode him with a lot of confidence,” Kenneally said. “He saved ground on the second turn and kicked it in pretty good turning for home. He was much the best. Nice horse.”

A $30,000 auction purchase in 2019, Point Me By now sports a 3: 2-0-0 record with $238,268 earned for owner Homewrecker Racing. Kenneally said several turf races against fellow 3-year-olds are under consideration for his next start.

“He’s done a lot in a short period of time,” Kenneally said. “Hopefully going forward, he can compete with proven, legitimate graded-stakes horses. I believe he can.

“He relaxes so well, and his pedigree says further would be better, so I think when we stretch him out that we’ll see him as good or better.”