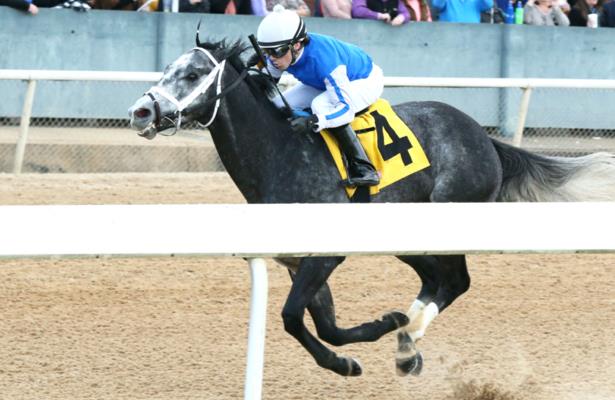 Knicks Go, who was making his 4-year-old debut, earned a preliminary Beyer Speed Figure of 100 for his front-running 7 ½-length victory under Joe Talamo. The colt covered 1 1/16 miles over a fast track in a meet-best 1:42.57 and paid $8 as the second choice in the nine-horse field.

Knicks Go emphatically snapped a 10-race losing skid in his first start for Cox, who began training the gray son of Paynter late last year. Knicks Go whistled through a :46.89 half-mile and drew off in the stretch after being challenged turning for home.

“I didn’t really know that much about him before we had him, other than he just kind of seemed like a horse that would run well here or there,” Cox said. “He trained extremely well for us. Obviously, that was no surprise given the way he’d trained in the mornings. He’s very aggressive in the way he gallops. Obviously, Jorge had done a fantastic job with him.

Owned by Korea Racing Authority, Knicks Go won for the first time since a front-running 5 ½-length upset at 70-1 in the Breeders’ Futurity (G1) for 2-year-olds in October 2018 at Keeneland.

Knicks Go, at 40-1, then finished second to Game Winner in the Breeders’ Cup Juvenile about a month later at Churchill Downs. Game Winner, unbeaten in four starts, was the country’s champion 2-year-old male of 2018.

Cox said Knicks Go is the first horse he’s trained for Korea Racing Authority. Previously with trainer Ben Colebrook, Knicks Go was racing for the first time since a 10th-place finish in the Commonwealth Turf Stakes (G3) on Nov. 9 at Churchill Downs.

Another local two-turn option for older horses is the $250,000 Oaklawn Mile on April 11.

“My first thought watching the race was, ‘First race in a while; brief freshening,’” Cox said. “We’ll kind of monitor him and see how he comes out of it. I’d really like to give him some time between this one and next one to, hopefully, take that bounce theory away. He’s not a big horse. He does carry great flesh and great weight, but he’s not a big horse. That would be a little bit of a concern of mine as far as how quick he runs back.”