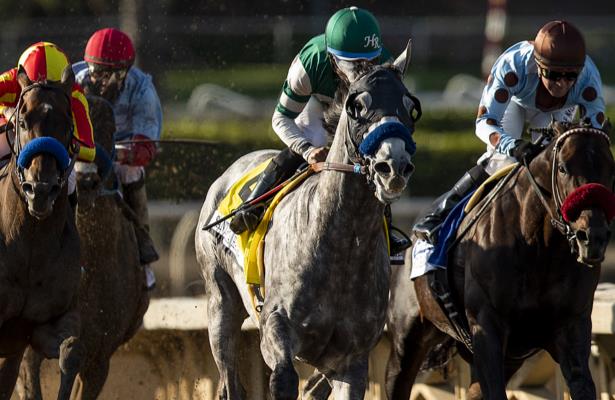 Trainer John Sadler is sending Gift Box east for a chance to punch a ticket into the Breeders’ Cup Classic.

Gift Box was listed Sunday by Churchill Downs as a probable entry for Saturday night’s Grade 2, $600,000 Stephen Foster. The race in Louisville, Ky., carries with it a “Win and You’re In” berth into the Nov. 2 Classic back at Gift Box's Santa Anita Park base.

The 6-year-old son of Twirling Candy sports five wins in 16 starts, the last three of which have all come since Sadler's chief client, Hronis Racing, purchased the gray and transferred him from Chad Brown. Gift Box won the track’s San Antonio Stakes (G2) on Dec. 26 and Santa Anita Handicap (G1) on April 6, then finished second on Memorial Day to Vino Rosso in the Gold Cup at Santa Anita (G1).

The Stephen Foster, Race 8 on the card, goes 1 1/8 miles on the Churchill dirt for horses 3-years and up. Post time Saturday is scheduled for 9:47 p.m., and the race will be broadcast on NBC Sports Network.

The Foster leads a strong cast of stakes under the Twin Spires, with other prospective fields below. Post positions draw Wednesday.

Kentucky Derby 2020: King Guillermo impresses at Churchill
The action beneath the Twin Spires for the Kentuck...