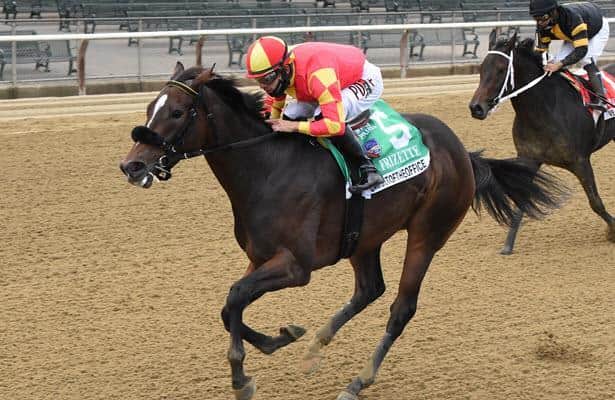 Dayoutoftheoffice, whose win in the 2020 Frizette Stakes gave trainer Tim Hamm his only Grade 1 victory, was retired before she would have been entered in Saturday's Test Stakes (G1) at Saratoga.

After working a bullet five-furlong drill on Saturday at Thistledown, she was "slightly off," according to a news release from co-owner Siena Farm. "Diagnostic X-rays revealed mild changes which will prevent her from making a start" in the Test.

Hamm told Horse Racing Nation on Wednesday that "she had some wear and tear over the last two years, and to come back and win a Grade 1 again is probably going to be tough for her," he said. "So I think with her broodmare value, it's in everyone's best interest to let her have a next career.

And Hamm emphasized, "There's no chip, no fracture, no tendon, no anything. She's good and healthy, and we're going to keep it that way and let her be a nice broodmare."

Owned by Hamm and Siena Farm, Dayoutoftheoffice began her career with three wins last year, breaking her maiden on debut at Gulfstream Park and then winning the 2020 Schuylerville (G3) at Saratoga ahead of the Frizette. She finished her 2-year-old campaign with a runner-up effort to Vequist in the Breeders' Cup Juvenile Fillies.

Dayoutoftheoffice's first race this year was a second-place finish in the Eight Belles (G2), which was won by Obligatory. She then finished fourth out of five in the Acorn (G1) in her last start.

"She won my first Grade 1, so that's pretty exciting stuff," Hamm said. "So that's got to be one I'll never forget, no one can ever take her place in doing that. The first is the first. (She is a) very, very dynamic, high-energy horse as far as on the racetrack. She came on with a splash and she had a brilliant 2-year-old career and came back at 3 and showed she still had it, ran a big Eight Belles race. A lot of memories, a lot of firsts with her."