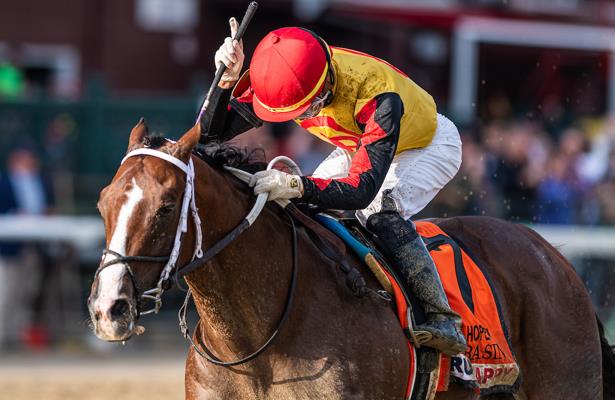 Blue Grass (G2) hopeful Basin, who races for Terry Green’s Jackpot Farm, was the first horse to breeze over Keeneland’s fast track Monday when he covered a half-mile in :50.20 around 5:45 a.m.

The breeze was the second consecutive move at Keeneland for last year’s Hopeful (G1) winner, who covered 5 furlongs in 1:00.60 a week ago.

In his most recent race, Basin was second in a division of the Arkansas Derby (G1) at Oaklawn Park. The colt, which has won two of six races and earned $471,000, is ninth on the Road to the Kentucky Derby leaderboard with 50 points.

Basin is a member of the first crop by Liam’s Map, who won the 2015 Breeders’ Cup Dirt Mile (G1) at Keeneland.

Jackpot purchased the colt for $150,000 at Keeneland’s 2018 September Yearling Sale, where he was consigned by Brookdale Sales, agent for breeder Cottonwood Stables.

Asmussen, North America’s second-leading all-time trainer by wins (8,896) and earnings ($333,188,601), has started five horses in the Blue Grass with his best finish a runner-up effort by Storm Treasure in 2006.

He sent out Jackpot’s Zing Zang to a ninth-place finish in the 2018 Blue Grass.

Entries for the 96th running Blue Grass and five other stakes will be taken Wednesday.