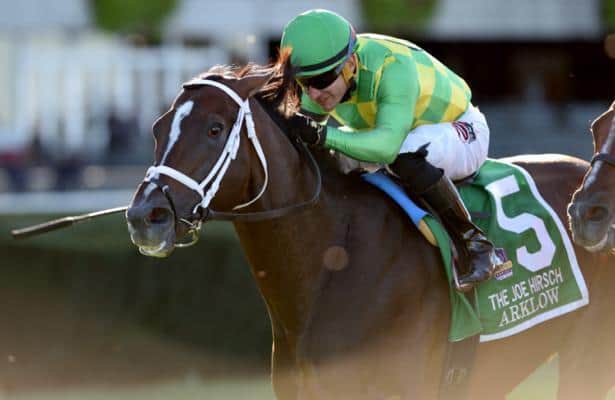 The 1 ½-mile Louisville, run over the Matt Winn Turf Course, is carded as the 11th race finale on Saturday’s program.

Conditioned by current Churchill Downs leading trainer Brad Cox, Arklow will make his first start since a fifth-place finish in the $1 million Pegasus World Cup Turf Invitational (G1) in January at Gulfstream Park. The 6-year-old son of Arch has been training consistently at Churchill Downs with back-to-back workouts over the lawn with jockey Florent Geroux aboard.

“It was a huge relief to see him win that Grade 1,” Cox said, looking back to the Turf Classic. “He had such a strong campaign and was knocking on the door at a Grade 1.”

Arklow shows six victories in 25 starts, including a win over the local course at age 3 in the 2017 American Turf (G2). Arklow competed in some of the nation’s most prestigious turf races at age 4 and 5, including the 2018 and 2019 editions of the Breeders’ Cup Turf (GI).

In the 2018 Breeders’ Cup Turf, Arklow finished a well-beaten fourth behind the thrilling stretch duel of Enable (GB) and Magical (IRE). Arklow returned to the Breeders’ Cup in 2019 and finished eighth, but was only defeated 2 ¾ lengths by Horse of the Year Bricks and Mortar.

Geroux has the call of Saturday’s Louisville and will break from post No. 5.

Among the other rivals that will line up in the starting gate for Saturday’s Louisville include last year’s Louisville winner Tiz a Slam. Owned by Chiefswood Stables and trained by Roger Attfield, Tiz a Slam cruised to a front-running score in last year’s race under Steve Bahen. Following his victory in the Louisville, Tiz a Slam recorded wins in the Singspiel (G3) and Nijinsky (G2) at Woodbine. He’ll enter the Louisville off of a six-month freshening following a non-descript seventh-place finish in the Red Smith (G3) in late November at Aqueduct.

Current Churchill Downs leading rider Tyler Gaffalione will have the call from post 6.

Admission Office drew post 12 with Julien Leparoux in the saddle.

The Louisville field from the rail out (with jockey and trainer):

On Saturday, the temporary rail on the Matt Winn Turf Course will be taken down and the races will be run in Lane 1 along the inside hedge. The temporary rail will remain in Lane 2, 15 feet from the hedge, for racing on Thursday and Friday.

The National Weather Service forecast on Saturday calls for ideal conditions: sunny skies with a high of 80 degrees.