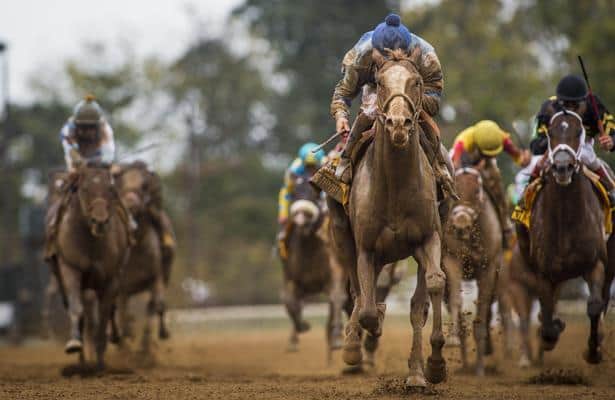 Calumet Farm’s Bravazo and G M B Racing’s Lone Sailor, the second and third place finishers, respectively, in the $500,000 Breeders’ Futurity (Grade I) at Keeneland, are set for a rematch in the $80,000-added Street Sense Overnight Stakes on Sunday’s opening day card at Churchill Downs’ 21-day Fall Meet.

The quartet of stakes serve as local steppingstones to the pair of Grade II, $200,000, 1 1/16-mile races on the Saturday, Nov. 25 “Stars of Tomorrow II” program – the open Kentucky Jockey Club and Golden Rod for fillies that are part of the Road to the Kentucky Derby and Kentucky Oaks series which award points to the Top 4 finishers (10-4-2-1).

Bravazo, a 2-year-old colt by Awesome Again trained by Hall of Fame conditioner D. Wayne Lukas, broke his maiden by 4 ¾ lengths at Churchill Downs on Sept. 16. The homebred attempted graded-stakes company for the first time in the Oct. 7 Breeders’ Futurity and tired after making up ground from just off the pace to finish second, four lengths back of Free Drop Billy, one of the top contenders in the Nov. 4 Breeders’ Cup Juvenile (GI).

The chief rival to Bravazo could be Lone Sailor, who finished 2 ½ lengths behind Bravazo in the Breeders’ Futurity. Trained by Tom Amoss, the 2-year-old colt by Majestic Warrior was an 11-length maiden victor at Saratoga on Sept. 3 over the listed “sloppy” racetrack.

All horses will tote 118 pounds except Renaisance Frolic who will carry 122.

The 128th Fall Meet will feature 21 days of racing over a four-week stretch through Nov. 26. After Sunday’s opening day program, racing will be conducted on a Wednesday-Sunday schedule with dark days on Mondays and Tuesdays. Most programs will feature 10 races with admission gates opening at 11:30 a.m. and the first race at 1 p.m. Eleven-race programs are scheduled for opening day, Nov. 11 and Nov. 18, and there will be 12-race cards over the final four days of the meet (Nov. 23-26). There are special first race post times on three dates: Friday, Nov. 3 (2 p.m.); Saturday, Nov. 4 (2:15 p.m.) and the Thanksgiving Day card on Thursday, Nov. 23 (11:30 a.m.).