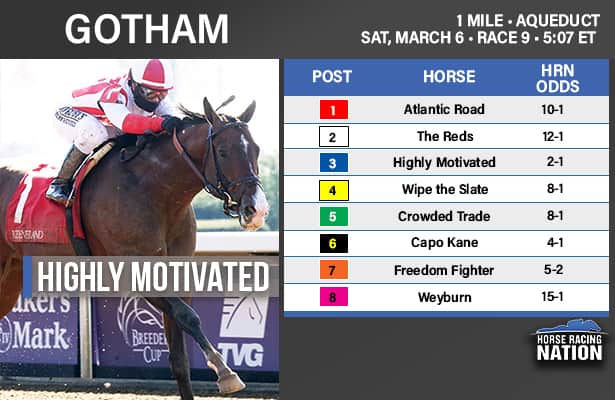 The $250,000, Grade 3 Gotham at Aqueduct is the penultimate stop on the New York road to the 2021 Kentucky Derby. The one-turn mile at the Big A offers an opportunity to secure a spot in the Derby field while cutting back in distance with only two months until the first Saturday in May.

A field of eight will go to post this Saturday looking to secure some of the Derby qualifying points (50-20-10-5) that are available to the top four finishers.

Here is a full field analysis for the Gotham which is carded as race 9 out of 10 with post time scheduled for 5:07 pm ET. The morning lines odds are provided by the Horse Racing Nation staff.

1) Atlantic Road (10-1 – Quality Road – Todd Pletcher / Jorge Vargas, Jr.  – 2: 1-0-0 - $44,400) Owned and trained by Todd Pletcher, Atlantic Road broke his maiden in his most recent start by a head while racing on the lead going seven furlongs. In that race, he wore blinkers and was using Lasix, which will not be allowed in this stakes race in New York. He will face plenty of pace pressure as he tries this Derby prep. Toss.

2) The Reds (12-1 – Tonalist – John Kimmel / Pablo Morales – 5: 1-0-1 - $60,980) It took this son of Tonalist five races to break his maiden, but he faced good horses in his first few starts. He put all the pieces together when he broke his maiden at the Big A going nine furlongs at the end of January. He ran with Lasix in his last two starts. Toss.

3) Highly Motivated (2-1 – Into Mischief – Chad Brown / Javier Castellano – 3: 2-1-0 - $124,050) Highly Motivated has been training at Payson Park in Florida for Chad Brown after a promising 2-year-old campaign that included a maiden win over Known Agenda at Belmont Park in his second try in October followed by a victory in the Nyquist at Keeneland. Both of those wins were at 6 1/2 furlongs after stalking the pace, so the one-turn mile seems ideal. A brisk pace is expected from two of the other top betting choices, which will help Highly Motivated in his 2021 debut after a five-month layoff. Top choice.

4) Wipe the Slate (8-1 – Nyquist – Doug O’Neill / Kendrick Carmouche – 3: 1-1-0 - $48,500) Two-time Kentucky Derby winning trainer Doug O’Neill is always willing to ship his horses across the country to try the big races, and so it is with Wipe the Slate. The son of Derby winner Nyquist broke his maiden in his second try at Santa Anita in December. In his debut, he was a noteworthy second behind Life Is Good. In the Robert B. Lewis (G3), Wipe the Slate pressed the early pace but could not keep up when the racing got serious. Toss.

5) Crowded Trade (8-1 – More Than Ready – Chad Brown / Eric Cancel – 1: 1-0-0 - $44,000) Crowded Trade was a debut winner in a six-furlong maiden race at Aqueduct at the end of January. Sent off as the even-money favorite, he used a late closing move to get up in the final 70 yards and win by a length. He was purchased for $185,000 as a weanling. He will get plenty of pace to set up his closing move, but this is a significant class challenge. Use underneath.

6) Capo Kane (4-1 – Street Sense – Harold Wyner / Dylan Davis – 4: 2-1-1 - $144,500) After breaking his maiden at Parx, Capo Kane shipped up to win the Jerome at Aqueduct in a one-turn mile, picking up 10 Derby qualifying points. In the Withers (G3), the stretch out to nine furlongs was not to his liking as he set the pace but was passed and had to settle for third. The cut back to a mile seems ideal for Capo Kane. Win contender.

7) Freedom Fighter (5-2 – Violence – Bob Baffert / Manny Franco – 2: 1-1-0 - $73,000) Bob Baffert typically does not send horses to New York for Kentucky Derby preps, but he has a lot of 3-year-olds to separate this year. Also, the one-turn mile is a great fit for Freedom Fighter, who set the pace and ran second to his highly regarded stablemate Concert Tour in the seven-furlong San Vicente (G2). He won his debut at Del Mar in August six months before that Santa Anita stake. Win contender.

8) Weyburn (15-1 – Pioneerof the Nile – Jimmy Jerkens / Trevor McCarthy – 3: 1-1-0 - $62,520) This Jimmy Jerkens runner broke his maiden in his third start with a front-running effort going seven furlongs on a sloppy track at the Big A. His performance improved with blinkers on in his last two races. Toss.

The three top contenders in the Gotham present an interesting pace scenario. Capo Kane and Freedom Fighter chose this Aqueduct race because the one-turn mile fits their pace pressing style, but it appears that those two are going to battle on the front end along with a couple of long shots. That should set the table for Highly Motivated, who is the winner of his last two races rallying from a stalking position. He will make his 2021 debut for trainer Chad Brown, who excels at having horses ready to run after long layoffs.