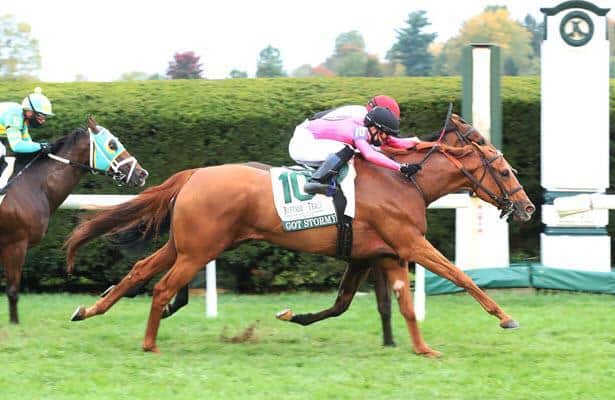 Seeing the price go up as multiple Grade 1-winning mare Got Stormy went through the sales ring last fall, Hall of Fame trainer Mark Casse got a sinking feeling.

“I knew that there was a reserve on her. My wife and I watched from our office that night, and when she went well over the reserve, I said, ‘Well … ’ ” Casse recalled. “There was a sad moment.”

The feeling didn’t last long. Shortly after the hammer fell, Casse’s phone rang. At the other end was Ned Toffey, general manager since 2004 of Spendthrift Farm, which spent $2.75 million to acquire the multi-millionaire daughter of Get Stormy.

“I got a call about 15 minutes later from Ned Toffey and he said, ‘I’m going to ask you a real dumb question. We bought her and we’re going to run her another year, do you want to train her?’ ” Casse said. “I just laughed and I said, ‘Yeah, that is a dumb question.’”

Got Stormy won 10 of 26 starts and more than $2 million in purses for Casse and previous owner Gary Barber. Eight of those wins came in stakes, five of them graded, including the Fourstardave (G1) over males and the Matriarch (G1) in 2019.

“I had a conversation with Mark really right after we signed the ticket,” Toffey said. “Mark was really happy to have her rejoin his stable and he assured me that he felt like she would be more than ready to move forward and have a good year this year. Of course, we won’t put her in a spot to do anything she can’t do, and Mark’s a great caretaker. Certainly the way she’s worked has only heightened our excitement for what we’ll see from her this year.”

Got Stormy will begin her fifth and final season of racing Saturday in the $125,000 Honey Fox (G3) at Gulfstream Park. The 36th running of the one-mile Honey Fox for fillies and mares 4 and up is among nine stakes, eight graded, worth $1.475 million on a 14-race program.

Got Stormy will be returning to Gulfstream for the first time since winning an optional claiming allowance in March 2019. It is where the daughter of Grade 3 turf-winning mare Malabar Gold broke her maiden in her third lifetime start in February 2018.

“We’re very pleased with her. Last year I felt like maybe I didn’t have her quite as ready for her first start when we ran her, and the one thing I did was I tried to get her ready on the dirt,” Casse said. “So, this year I changed my mind and I sent her down and she’s been breezing over the turf. She loves to breeze on the turf. She should be good and ready.”

Given a freshening following her fifth-place finish in the Breeders’ Cup Turf Sprint (G1) Nov. 7 and a pair of dirt workouts at Casse’s training center in Ocala, Get Stormy joined his string at Palm Meadows, Gulfstream’s satellite training center in Palm Beach County, where she has breezed five times since mid-January. Two of them were bullets, a five-furlong move in 57.35 seconds Feb. 5 and a half-mile work in 47.45 Feb. 12.

“She’s doing well. She got a little break after the Breeders’ Cup and Mark’s just gradually brought her back along,” Toffey said. “In all of our conversations he’s just been thrilled with how she’s been working, so we’re as excited as everybody else is to see what she does.”

Got Stormy raced eight times in 2020 with two wins and two seconds, finishing fourth in the Endeavour (G3) in her debut. She continued to race between a mile and a mile and a sixteenth without success, including a runner-up finish in defense of her Fourstardave title, before Casse cut her back to sprinting.

She responded by winning the 6 1/2-furlong Ladies Sprint (G3) over a soft course at Kentucky Downs and the 5 1/2-furlong Franklin County (G3) at Keeneland leading up to the Breeders’ Cup, where she raced in mid-pack and wound up fifth, beaten two lengths.

“I’m anxious to see what the year brings for her (because) 2020 was a crazy year for a lot of reasons,” Casse said, “But for her, it was about weather, bad weather, and so many times running her on a track that she didn’t care for. And she now has a new dimension; she can sprint, as well. So it opens up some options.

“The biggest thing for her is, I don’t want to run her over a mile,” he added. “If she is going to run a mile, it has to be very fast.”

Got Stormy was not the only big-ticket purchase for Spendthrift last fall. They also went to $9.5 million for Monomoy Girl, the champion older mare of 2020 and champion 3-year-old filly of 2018 who is also back in training for one more year.

“We just thought it was a great opportunity for us to acquire some really good mares that eventually will wind up in our broodmare band. (Got Stormy) was one of a group that we bought that we felt could really upgrade our broodmare band and that we’d have a little fun with running for one more year before they come to Spendthrift. These kind don’t come around very often,” Toffey said. “She’s a pretty exciting type of mare, that’s for sure.”

Regular rider Tyler Gaffalione will be aboard from Post 2 in a field of nine that includes main-track-only entrant Nomizar.

Casse also entered D. J. Stable’s three-time graded-stakes placed Art of Almost. The Dansili mare will be opening her 5-year-old season after capping 2020 running second in the 1 1/4-mile Maple Leaf (G3) Nov. 7 at Woodbine and third in the 1 1/16-mile My Charmer Dec. 12 at Gulfstream. Hall of Famer John Velazquez rides from outside Post 9.

Heider Family Stables’ Zofelle returned from 211 days between races to be a popular winner of the one-mile Marshua’s River (G3) Jan. 23 at Gulfstream. It was the 5-year-old mare’s first start since finishing fifth on the Just a Game (G1) last June at Belmont Park, after which she was given a break. Second in the one-mile Sand Springs last winter in her only other Gulfstream race, she will be ridden from Post 6 by Irad Ortiz Jr.

Three Diamonds Farm’s Jakarta will be stretching out to a mile for the first time since winning the Powder Break last May at Gulfstream. Third to Got Stormy in the Franklin County, the 6-year-old Bustin Stones mare won the Claiming Crown Distaff Dash on Dec. 3 and was fourth in the Abundantia Jan. 1, both five furlongs over Gulfstream’s turf.

“She’s stretching out a little bit, but she’s doing well so we’re looking forward to it,” Nolan Ramsey, assistant to trainer Mike Maker, said. “She’s one of those horses where she always finds herself on the front end. I don’t know that she’s necessarily quick enough to go five-eighths down here. Speed seems to hold down here, so we’re kind of hoping we might get things our way. We’d like to try her at least going a mile down here.”

Kendrick Carmouche, in from New York to ride Fire At Will in the Fountain of Youth, has the assignment on Jakarta from Post 8.