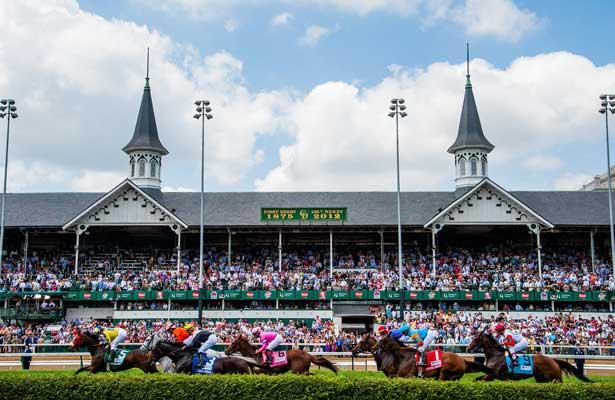 Following an eye-popping 12-length maiden victory at Ellis Park on July 30, trainer Kellyn Gorder can’t help but speak blessings of his promising 2-year-old filly Sully’s Dream, who is taking a jump up in class in Saturday’s $200,000 Pocahontas Presented by TwinSpires.com (GII).

“Halfway through the summer I sent a text to the owner (Ralph Ebert) and said, ‘I think this could be the best filly I’ve had in my barn,’” said Gorder, who seeks his first graded stakes victory since the 2013 Jefferson Cup (GIII) with General Election. “I really don’t think we’ve got close to seeing what she’s capable of and I think highly of her. I’m not sure that she beat much in that race, but it really is hard to judge. She’s been working with older horses and physically she doesn’t look 2; she looks like a 3-year-old.”

The Pocahontas serves as a part of the Breeders’ Cup “Win & You’re In Juvenile Fillies Division,” whose winner will receive an automatic berth into the $2 million 14 Hands Winery Breeders’ Cup Juvenile Fillies (GI) at Santa Anita on Nov. 5. Should this daughter of Colonel John return to the winner’s circle, she will likely be California bound.

“If she punches the ticket here, that’s what we’ll do,” Gorder said. “I’m a little concerned with the outside post but it’s nothing I’d be too nervous about. The way she goes about her work is just so professional. She does everything so easily and I think that she’s pretty special.”

Sully’s Dream will receive the riding services of Robby Albarado, who was aboard for her astonishing maiden win.

LANERIE HOPES FOR MORE SUCCESS DURING SEPTEMBER MEET – Last year, jockey Corey Lanerie entered the Churchill Downs September Meet fresh off a frustrating 0-for-57 at Saratoga, but this year he stayed home to ride at Ellis Park, which resulted in a riding title at the Henderson, Ky. oval.

The Lafayette, La. native finished off the Ellis Park meet with 26 wins in 125 starts banking $557,782 when riding at the track.

“Last year I knew going into Saratoga that I’d be up against some tough competition,” Lanerie said. “Did I think that I would not win a race? No, but I knew how tough it would be and coming home I have my people that are loyal to me and I’m grateful for my good business here.”

Lanerie will be in search of his 12th Churchill title in the past 13 meets.

“I got to stay home and win some races and was fortunate enough to be leading rider at Ellis Park,” Lanerie said. “I’m very glad to get back to Churchill. I expect that we can hopefully kick off against winning a bunch of races and try my best to stay on top.”

SATURDAY’S FIRST RACE MOVED TO 2:30 P.M.; LOUISVILLE/FLORIDA STATE ATTENDEES TO RECEIVE FREE ADMISSION – With a nationally-televised ACC showdown between the 10th-ranked University of Louisville football team and second-ranked Florida State at nearby Papa John’s Cardinal Stadium on Saturday at noon, Central Avenue is certain to be bustling with activity this weekend.

Track officials proactively moved back Saturday’s post time from 12:45 p.m. to 2:30 p.m. so fans could enjoy the best of both worlds and to help ease area traffic.

Those who attend the big game are invited to visit Churchill Downs afterward free of charge on Saturday simply by showing their ticket stub. Eleven races, including four stakes events, are scheduled Saturday and the last race is scheduled for 7:29 p.m.

ESPN’s College GameDay will visit Louisville for the first time for Saturday’s game, and there will be some elements from Churchill Downs fused into the broadcast, including track bugler Steve Buttleman starting the show at 9 a.m. with the “Call to the Post.”

FAMILY ADVENTURE DAY IS SUNDAY – Presented by Kroger and in partnership with Kosair Children’s Hospital, Family Adventure Day at Churchill Downs will be held Sunday (Sept. 18) – first Sunday of the September Meet.

Families are encouraged to bring the kids to Churchill Downs for a day of racing and family activities including pony rides, inflatables, petting zoo, stick horse races in the Paddock, face painting and more. New activities for this event include Sportsdrome Speedway race cars and drivers; the Air 60 police helicopter and the Belle of Louisville float. Kosair Children’s Hospital activities will feature the Caring for Your Child’s Mind, Body and Spirit: Mighty Titans obstacle course; kids’ yoga; and a “just for kids” craft activity.

Tickets for adults and children age 3 and up are just $8 when purchased online in advance at ChurchillDowns.com, and include unlimited access to all kid-friendly activities through 5 p.m. Churchill Downs is also offering a Family Four Pack that includes four Family Adventure Day tickets, four family meals in the Family Adventure Day area and two racing programs for only $44.