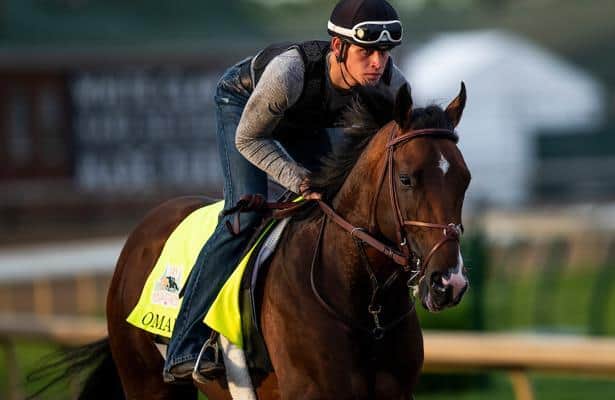 The 2019 Kentucky Derby favorite Omaha Beach was under tack and ready to roll Wednesday morning when it came up to 7:30 and the special Derby-Oaks training session at Churchill Downs.

The Fox Hill Farm standard bearer, officially made the 4-1 morning line top choice for the Run for the Roses on Tuesday when he drew post 12 in the 20-horse field, had regular exercise rider Taylor Cambra aboard as they made their way trackside from Barn 28 alongside a big, white pony.

Cambra took his charge from the five-furlong gap on the backside to the paddock gap on the frontside to stand for a bit, then proceeded to gallop him.

“He went a mile and three-quarters,” said the tall reinsman as he flashed a big smile.

Was it his best gallop yet, someone asked?

There was no argument about that from Mandella.

“Good as ever,” the Hall of Famer noted.

The Arkansas Derby (GI) winner returned to his barn, then had a nice bath just outside it as a substantial crowd looked on. Later, as he walked under the shedrow, he once again displayed the sweet disposition he has become noted for.

Throughout Derby Week, Mandella has been quick to make friends for racing -- as well as special memories -- when it comes to kids and his horse. On hand Wednesday were about a dozen local grade school/junior high kids there with adults to get a feel for Louisville’s most special event.

The trainer had all the kids bunch together at the mouth of his barn and when Omaha Beach swung by on his walk, he brought him over and dropped his big head right in the middle of the awed youngsters. Cell phone cameras clicked like crazy and the school kids giggled in delight. One young towhead lad got a special treat when the horse took a liking to him and began to gently nibble on his hair. You know he’ll never live that one down with his buddies, nor ever forget the special moment.

Mandella also noted that he’s expecting a crew of wounded veterans to be at the barn Thursday to take in the scene and bring a special camouflage blanket they’ve made in tribute to Omaha Beach and the special significance of his name in this, the 75th anniversary year of the bloodiest D-Day landing site on the French coast. The vets are involved with a unique group called Homes for Our Troops, which builds special houses for disabled veterans.

The trainer said he was likely to paddock Omaha Beach either Wednesday or Thursday – though possibly both -- in front of the race-day crowds. He has a paddock time today before the sixth race.