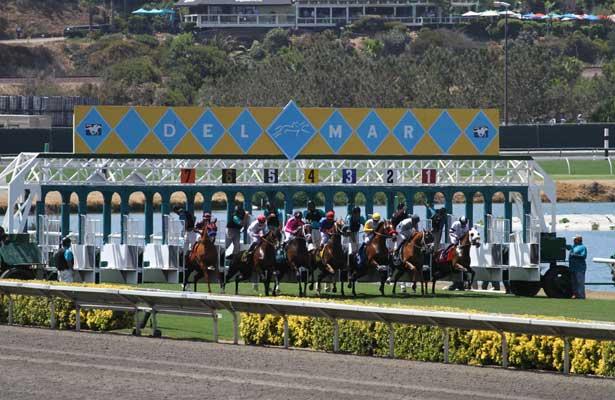 Two-time Eclipse Award –winning jockey Garrett Gomez, who hadn’t ridden since July 14 while endeavoring to resolve personal issues, made a smashing return to competition Saturday with a thrilling, come-from-behind victory aboard longshot Dice Flavor in the Grade II $150,000 La Jolla Handicap for three-year-olds.

Dice Flavor, sent postward at 8-1 in a highly competitive line-up of nine sophomores running a mile and one-sixteenth over the infield Jimmy Durante Turf Course, sliced between horses entering the stretch in a deft maneuver by Gomez. Once in the clear, Dice Flavor wore down Den’s Legacy in the closing strides to win by a half-length.

Final time for the distance was a brilliant 1:39.82, just thirty-one-hundredths of a second slower than the course record of 1:39.5 set in the 2010 renewal of the La Jolla by the swift Sidney’s Candy.

Den’s Legacy and jockey Corey Nakatani, who appeared to have the La Jolla wrapped up until collared by the winner, was a neck in front of Pure Loyalty, with Dry Summer fourth.

Freakin Rocket, the lukewarm 5-2 favorite ridden by Hall of Famer Mike Smith on the occasion of his 48th birthday, raced prominently into the stretch but then weakened to finish seventh. Greeley Awesome, 7-2 second choice, never threatened and ran eighth.

Dice Flavor, a son of Scat Daddy owned by Oda Racing Stable and US Equine and trained by Patrick Gallagher, returned $19.80, $9.20 and $5.40 while earning $90,000 after his third triumph in nine career outings, increasing his bankroll to $274,500. His most important previously was in the El Camino Real Derby at Golden Gate Fields last February.

The La Jolla Handicap is the prelude to the championship-deciding Grade II $300,000 Del Mar Derby on Sunday, Sept. 1.

Gomez almost won in his first race back from his lay-off, narrowly losing aboard Southern Sunshine to favored Bajan by a nose in the second race.