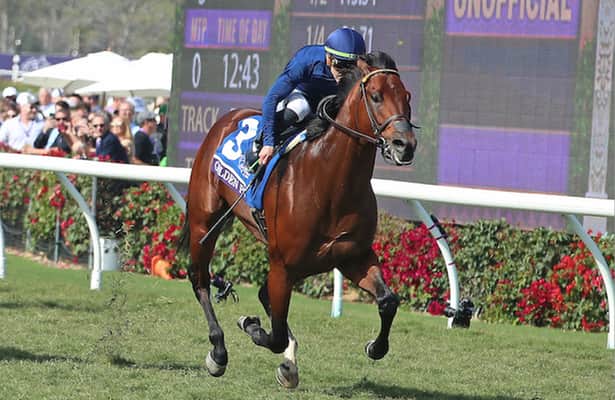 Sensational turf sprinter Golden Pal will try to get a stakes victory at Saratoga for the third straight year in Friday’s Grade 3, $300,000 Troy for 4-year-olds and up sprinting 5 1/2 furlongs over the Mellon turf course.

Golden Pal, a 4-year-old son of Uncle Mo out of 11-time stakes winning turf sprinter Lady Shipman, broke his maiden in the 2020 Skidmore at the Spa by 3 1/2 lengths under Irad Ortiz Jr. before winning the Breeders’ Cup Juvenile Turf Sprint at Keeneland.

Owned by Michael Tabor, Susan Magnier, Derrick Smith and Westerberg, he made his sophomore debut in the Quick Call (G3) last July at Saratoga, winning by three lengths en route to scores in the Woodford (G2) in October at Keeneland and the Breeders’ Cup Turf Sprint in November at Del Mar.

Unbeaten in his six stakes efforts in North America, Golden Pal made three starts in Great Britain, including a narrow second in the Norfolk (G2) in June 2020 at Royal Ascot as well as a distant seventh in the Nunthorpe (G1) in August at York.

Golden Pal started his year off on a high note, registering a 110 Beyer Speed Figure, according to Daily Racing Form, when winning Keeneland’s Shakertown (G2) on April 9.

Golden Pal has led through every point of call in each of his North American victories. Trainer Wesley Ward identified a positive mental demeanor as the bay colt’s greatest strength.

“He’s got a beautiful mind,” Ward said. “As we bring these horses up, a lot of them will get a little on edge and a little hot and sweaty. But if you notice him he’s just really cool and composed and focused. Very few horses are like that. He knows what he’s already going to do. There are a lot of horses that anticipate things, so that’s one thing when you lead a horse over for a big race, a lot of them run part of their race prior to going in the gate, but you’ll never see that with this horse. He’s just dead on ready to go.”

Golden Pal has trained forwardly over the Oklahoma training turf course since arriving at Saratoga. After firing two five-furlong bullet works, he logged another move at the distance Friday in 1:01.86 under exercise rider Julio Garcia.

“He knows the horse, and he’s worked the horse his whole life,” Ward said. “He just seemed relaxed and did everything right for Julio. His last work was awesome, so we were ready. With the track the way it was (Friday) morning, the turf with the rain the night before, we couldn’t have asked for anything better than that.”

Although speed has been a highly useful weapon for Golden Pal, Ward said laying right off the pace could possibly be of more benefit to the talented horse.

“He’s very tractable in the mornings. No one’s really tried to take him back, but it’s something that could happen,” Ward said. “Irad (Ortiz Jr.) has been on him and has seen what Julio has done with him in the mornings. In the mornings he’ll sit behind horses and just relax and then ease out and ease right to them. It actually would be a little better if we didn’t have to go to the front.”

Golden Pal, bred in Florida by original owner Randall Lowe, has banked earnings in excess of $1.4 million. Ortiz, the jockey in five of Golden Pal’s six stakes wins, retains the mount from post 5.

Two of the past four runnings of the Troy have been captured by an 8-year-old, and Larry Johnson’s True Valour will attempt to add to that number for two-time Troy-winning trainer Graham Motion.

Making his 34th lifetime start, the veteran son of Kodiac was a close third at 14-1 in the Jaipur (G1) on June 11 at Belmont Park. He set the pace in the six-furlong test, battling with the Ward-trained Arrest Me Red down the stretch, but was unable to stave off an outside rally from Casa Creed.

“I thought his race was huge. You can't be disappointed in a race like that,” said Motion, who has trained True Valour through his last eight starts. “He'll have to run back to that race to compete with Wesley's horse, who is very good. But this is a race we circled a while ago, and we'll stick to our guns. I couldn't be happier with how he's coming up to the race.”

A two-time graded stakes winner going one mile for previous trainer Simon Callaghan, True Valour has displayed frontrunning dimensions this year, including in taking the King T. Leatherbury at Laurel Park, which was his first start since finishing sixth in the Al Quoz Turf Sprint (G1) the previous year. He also showed speed winning over the Tapeta at Woodbine in November 2020.

“I've been surprised with the speed he's shown this year. When we first bought him ,we continued stretching him out, and then we took him up to Canada and tried shortening him up, and he hasn't looked back,” Motion said. “Even in Dubai, I thought he ran a very respectable race. He just got stuck on the wrong side. Everybody else stayed near side, and him and one other horse were far side, and he wasn't beaten much more than two lengths.”

True Valour will be piloted by mid-Atlantic-based rider Feargal Lynch from post 6.

After capturing last year’s Troy with Fast Boat, trainer Joe Sharp will pursue his second straight win in the race when saddling Dugan-McNichol Racing’s Spycraft. The 5-year-old son of Discreet Cat enters off his first stakes victory in the Dark Star Turf Sprint on June 22 at Canterbury Park.

Transferred to Sharp from the barn of Eddie Kenneally two starts back, Spycraft was victorious in his debut for his current trainer with a 1 1/2-length win on good turf at Horseshoe Indianapolis.

“Obviously it’s a big step forward, but he’s been checking all the boxes,” said Sharp, who also won the Troy with Shore Runner. “We sent him up here early to get him acclimated, and he’s had three good works over the Oklahoma turf course. I’ve been on him myself every time he’s breezed, and he’s really at his best. He’s shown some versatility in being able to come from his stalking position as well, so based on who’s in the race, that may play into our favor. We know we’re asking the horse to step forward, but he’s at his best, so now is the time to ask him.”

William Branch’s Carotari will seek to make amends following a last-out seventh as the favorite in Monmouth Park’s Select for trainer Brian Lynch. The 6-year-old Artie Schiller gelding was a pacesetting second to Fast Boat in last year’s Troy, earning a career-best 102 Beyer.

He set the pace en route to victory in the Janus on Dec. 31 at Gulfstream Park before emerging off a five-month hiatus to win the Jim McKay Turf Sprint on May 21 at Pimlico. Luis Saez, last year’s leading rider at Saratoga, will ride from post 4.