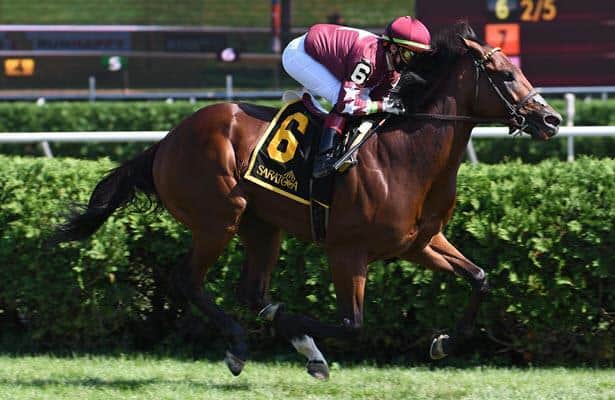 Golden Pal had no trouble dispatching of the field in the $85,000 Skidmore Stakes for 2-year-olds on the turf Friday at Saratoga, going gate-to-wire to earn his first career win in start No. 3.

The Uncle Mo colt, trained by Wesley Ward and ridden by Irad Ortiz Jr., broke quickly from the gate and raced all alone while setting opening fractions of 22.99 and :44.37 for the half mile in the 5 1/2-furlong Skidmore.

Fauci, also from the Ward barn, chased gamely throughout but proven no match for his stablemate. Golden Pal kept to task through the stretch and crossed the wire a 3 1/2-length winner. Fauci held second and was followed by Sky's Not Falling and Sunny Isle Beach.

In the lead-up to the race, Ward expressed high confidence in both of colts.

“Fauci is very good and he showed it,” Ward said earlier in the week. “I’d be talking him up like he’s the second coming of Jesus if I didn’t train this other horse.”

Golden Pal, a son of Uncle Mo, is the first foal out of Lady Shipman, a daughter of Midshipman who was a graded-stakes winner sprinting on grass and tallied 13 wins from 21 starts. Ortiz Jr., who also rode Lady Shipman, had high compliments for Golden Pal after the race.

“He’s one of the most impressive 2-year-olds I’ve been on in the year so far,” Ortiz said. “Hopefully he stays sound.”

The race was Golden Pal's third attempt to break his maiden. He ran second on debut at Gulfstream Park on Apr. 17 and then shipped to England for the Royal Ascot meet where he finished second in the Group 2 Norfolk Stakes on June 19.

Ward said the Skidmore win could set the colt up for a run in the Breeders' Cup Juvenile Turf Sprint at the same distance Nov. 6 at Keeneland.

"He's something special, this guy. I think we just got a little peek at it," Ward said. "From everything we've seen here, they're coming into his homecourt like Michael Jordan in the United Center in the Breeders' Cup this year. He's a very, very nice colt. I'm very thankful for the owner.