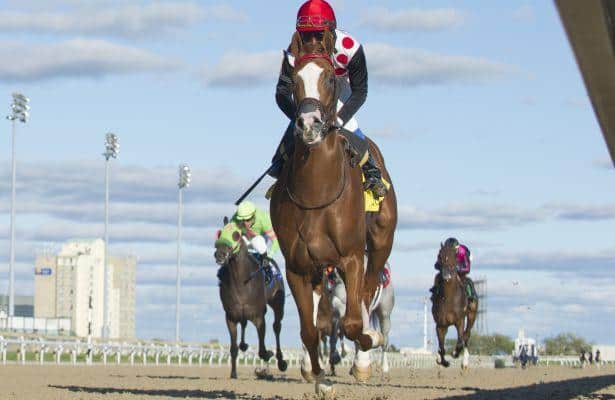 Live Oak Plantation's Golden Hawk remained undefeated in two starts and completed a sweep of the weekend 2-year-old stakes for the Mark Casse stable with a handy score in Sunday’s Grade 3 Grey Stakes.

Breaking from post 4 in the compact field of five, Golden Hawk was away alertly but was pressed by Han Sense on the inside heading into the first turn of the 1 1/16-mile Grey. Husbands was taking no chances, however, and let Golden Hawk take charge heading into the backstretch while carving out fractions of :24.51 and :48.60.

“With a small field, you don’t want to get trapped on the first turn,” said Husbands. “So I just let him run away from there, and he just pricked his ears. I had everything my way.”

Han Sense had held his position on the rail, and while King and His Court and Night Watchman took runs at the leader around the far turn Husbands had yet to call on Golden Hawk and the colt kicked away to a 5 ¼ length victory.

Han Sense won the place battle over King and His Court by a half-length with Night Watchman and Preemptive Strike completing the order of finish.

The victory completed a big weekend for the Casse outfit at Woodbine where the Hall of Fame conditioner sent out Gale Force to win Saturday’s Grade 3 Mazarine Stakes for juvenile fillies.

Bred in Kentucky by his owner, Golden Hawk is a colt by Tapit out of the Gone West mare, Gone Purrfect. Golden Hawk won his debut, at seven furlongs on the turf, defeating the experienced and promising Woodbridge by a head.