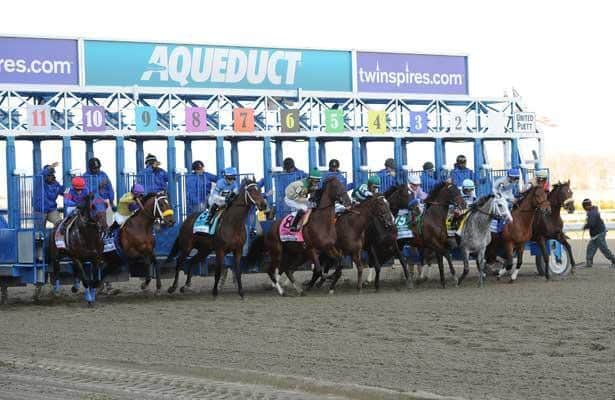 A talented and familiar group of ten 3-year-old New York-bred fillies will vie for their first stakes victory in the $125,000 Franklin Square Stakes on Sunday at Aqueduct Racetrack.

Heading the field is Golden Gem for My Meadowview Farms and trainer Rick Violette. The daughter of Wildcat Heir, made her debut a winning one on November 8 at Aqueduct with a bold three-wide move in the upper stretch to pull clear by 3 ½ lengths.
Jockey Manuel Franco retains the mount for Golden Gem who will leave from post-positon 7 as the 7-2 morning line favorite.
Sonora, trained by Eddie Kenneally for owner Mike Rutherford, comes out of an impressive maiden victory of her own at the Big A on November 14 which she won by 4 ½ lengths. Previous to that, she finished second by a head in her debut to fellow entrant My Super Nova on a sloppy track October 23 at Belmont Park.
"She's doing really well and fantastic heading into the race," said Kenneally. "Schedule-wise we were a little thrown by the weather but she has responded well. Preferably, I'd like to be on the outside [post] but we'll learn a lot about her on Sunday and we'll see how she responds."
Sonara, 9-2 on the morning line, will depart from post 2 with Junior Alvarado aboard.
Following a pair of dismal efforts in the East View and Key Cents stakes, My Super Nova looks to get back on track for trainer George Weaver and R. A. Hill Stable. The dark bay filly by Super Saver began her career with a game effort, losing by a neck, before returning to finish a distant second in the Joseph A. Gimma stakes on September 21 at Belmont Park. She then broke her maiden on a sloppy track October 23 at Aqueduct where she defeated Sonora.
My Super Nova stands at 4-1 on the morning-line with jockey Irad Ortiz, Jr. taking the call from post 10.
Trainer Jimmy Jerkens has entered Hard to Stay Notgo for owners Chester and Mary Broman. After setting a tepid pace most of the way last time out in the Joseph A. Gimma, she weakened to finish third. A daughter of More than Ready out of Whichwaydidshego by Storm Cat, Hard to Stay Notgo won her debut on August 6 at Saratoga Race Course by five lengths. In her next start, the Seeking the Ante stakes, she finished second as the odds-on favorite.

Hard to Stay Notgo is 4-1 on the morning-line and will have a new rider in the irons as Angel Arroyo gets the mount. They will leave from post position 8.

Nonna Jo, trained by Neal Terracciano for Lianna Stables, will make her first start since a distant third-place finish in the Seeking the Ante Stakes, where she was three-wide before tiring. Nonna Jo will leave from post 6 and is 6-1 on the morning line.
Rounding out the field are recent Aqueduct December maiden winners Majestic Jessica for Bruce Brown and DutchessViews Farm; Enduring Touch for trainer John Terranova; the Dominick Schettino-trained Bernstein Flambe; and Saluda for Abigail Adsit and Drawing Away Stable.