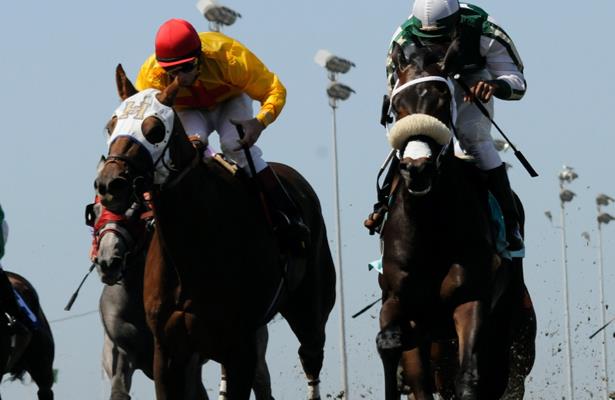 Thursday’s sixth race at Golden Gate Fields went official without an inquiry or an objection, but jockeys Julien Couton and Silvio Amador didn’t escape discipline after using the same whip in the stretch of the maiden special weight event for 2-year-old fillies.

Couton was rounding off the turn under Olive You More when he lost his whip, then began looking for some assistance. Amador, backing up under Belle Magie, looked over at his fellow rider, understood the request and handed his stick off to Couton.

Belle Magie continued to make a mild rally for third, whereas Olive You More faded to be last of nine in the one-mile race.

Both jockeys were on Saturday assessed 30-calendar-day suspensions — Amador “for failure to give his best effort by voluntarily relinquishing his riding crop to a rival jockey” and Couton “for soliciting and gaining control of a rival jockey’s crop," according to the stewards ruling.

Their suspensions run from Monday through Jan. 14.

Couton was aboard the 7-2 favorite when he lost his whip, while Amador was on a 13-1 longshot. Both jockeys are in the top six in terms of wins in the Golden Gate rider standings, positions they figure to lose during a lengthy term on the sidelines.