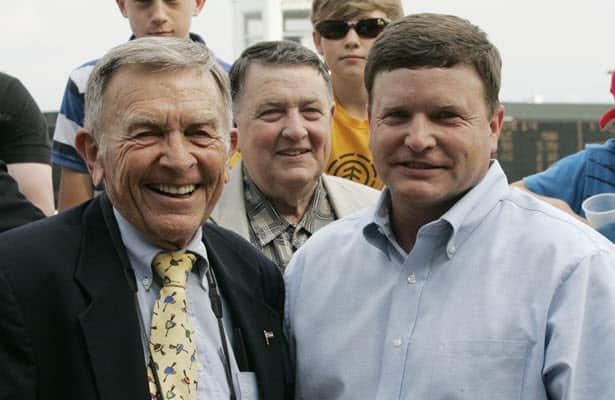 Buff Bradley has reached the end of his training career.

He announced at the beginning of May that he would retire at the end of the Churchill Downs spring meet. Now, the end of the meet is only days away, with Thursday marking his final morning as a trainer.

“This last week here, it’s quite different,” Bradley said. “I know I'm going to miss it and I’m going to be upset having to leave it, but it’s just what I have to do”

Bradley has Tonal Impact in a $100,000 maiden special weight race on Friday under the twin spires. On Saturday, the trainer has no entries.

After that, he will finish dispersing the rest of his barn, currently down to a handful of horses, then continue his search for other work in the racing industry. Bradley said he had not yet suffered major logistical issues.

“The horses have been dispersing for the last couple of months, but in the last month even more so,” Bradley said. “They’re going to several different trainers. Getting rid of the stuff, all your tack and everything, that’s the other thing you have to do.”

A Kentucky native, Bradley began as an assistant trainer in Louisiana for Clarence Picou in 1989. In 1993, he struck out on his own, returning to Kentucky.

He is best known for two horses he and his father Fred bred, Grade 1 winner Brass Hat and Groupie Doll, winner of the 2012 and 2013 Breeders’ Cup Filly & Mare Sprints.

“I got to share those with my father when he was alive,” Bradley said. “They were two homebreds that we foaled on the farm and raised, so they were very special to us, both of them.”

Among his other career highlights, Bradley mentioned Divisidero and The Player, who he went above and beyond to save when he suffered serious injury in the 2018 New Orleans Handicap (G2). The Player now stands at Crestwood Farm.

Along the way, Bradley gained a rock-solid reputation on the backside.

“He’s as honest as the day is long,” said former trainer Bill Connelly, who worked with Bradley as part of the Kentucky Horsemen’s Benevolent and Protective Association.

Through the years, training got harder and harder for small barns, including Bradley’s. A recent shortage of skilled labor on the backstretch, coupled with difficulty getting horses helped seal the trainer’s decision to retire.

“I love getting up and coming out here, it’s fun for me to do,” Bradley said. “But the whole business hasn’t been as fun for me the last few years.”

Bradley has no plans to leave horse racing altogether, and continues to search for frontside work, hoping to help solve problems in the Thoroughbred industry. He will also continue his small-scale breeding operation on his farm in Frankfort, Ky.

“I don’t know how many years it will take me to learn to sleep in a little bit, but it’ll take some time I’m sure,” Bradley said. “As I tell everybody, I’ve got about three days of savings left, so I’m going to have to spend it wisely while I’m retired.”

As of Friday, Bradley had 575 career wins, with $19.2 million in career earnings.

Cutting dates? Fair Grounds is having issues filling races
The racing office at Fair Grounds has been having...