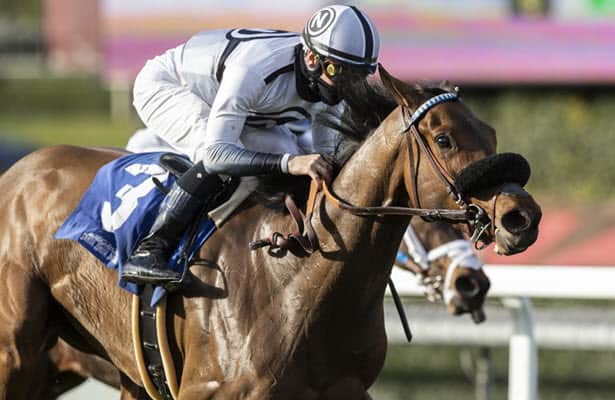 Del Mar will present a graded-stakes doubleheader Saturday that includes the 54th edition of the Grade 2, $200,000 San Clemente Stakes for 3-year-old turf fillies.

The San Clemente, named for the Orange Country beach town just above the Marines’ Camp Pendelton base north of the track, will go forth with a dozen 3-year-old fillies in the gate for a one-mile spin on the grass. It is scheduled as race 10.

The Irish filly Going Global, a stakes winner of all four of her U.S. starts this year, appears a stout choice and surely the one to beat in the San Clemente, which serves as a key prep for the track’s championship race for sophomore fillies – the Grade 1, $300,000 Del Mar Oaks at nine furlongs on Aug. 21.

Going Global, a daughter of the Irish stallion Mehmas, won only one of four starts in her native land as a 2-year-old, but has done nothing but win with her shift stateside. She is conditioned by Phil D’Amato.

Madone, who joins last-out allowance winner Freedom Flyer for trainer Simon Callaghan, won the Senorita (G3) at Santa Anita in May, but came back to be a disappointing 10th behind winner Going Global in the May 22 Honeymoon (G3) at Santa Anita.