Going Global looks to add another Grade 1 in the Gamely 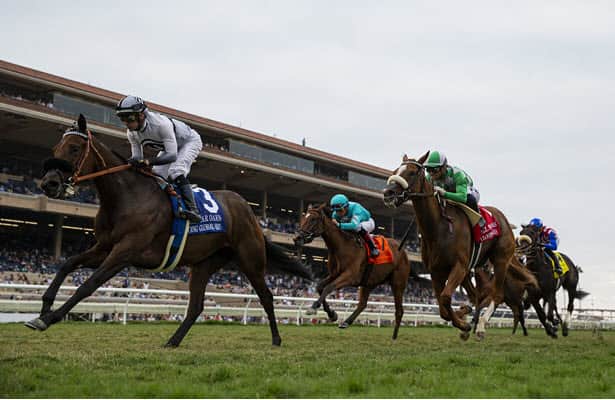 Unbeaten on the Santa Anita turf, Phil D’Amato’s Irish-bred Going Global heads a field of eight fillies and mares three and up going a mile and one eighth in Monday’s Grade 1, $400,000 Gamely Stakes.

Although well beaten on a wet-fast main track in the American Oaks (G1) December 26, Going Global bounced back with a command performance in the Royal Heroine Stakes (G2) at one mile on turf April 9, as she pressed the pace and went on to an impressive 1 3/4 length win at odds of 1-5 under Umberto Rispoli.

A winner of seven out of her nine stateside starts after arriving from Ireland, Going Global is unbeaten in three tries at the Gamely distance and will be reunited Flavien Prat, who although he has relocated to New York, is back at Santa Anita on Monday.  In eight Southern California starts, seven of them in graded stakes, Prat and Going Global found the Winner’s Circle on six occasions, dating back to her U.S. debut in the Sweet Life Stakes (G3) here on Feb. 14, 2021.

A winner of the Del Mar Oaks (G1) four starts back on Aug. 21, Going Global is unbeaten in five Santa Anita turf starts while being favored in seven of her nine races with D’Amato.  Owned by CYBT, Michael Dubb, Saul Gevertz, Michael Nentwig and Ray Pagano, 4-year-old Going Global is 13: 8-1-0 overall with earnings of $769,292.

Ridden for the first time by Juan Hernandez, the Puype-trained Canoodling was thoroughly dominant in a 1 3/4 length, gate to wire win going a mile on grass in the Wilshire Stakes (G3) May 1, her second graded stakes victory of the meet.

A gate to wire upset winner of the Megahertz (G3) three starts back on Jan. 29, going one mile on turf, Canoodling was beaten three lengths when a troubled fifth two starts back in the Buena Vista (G2), also at one mile on grass.

A 4-year-old filly by Pioneerof the Nile out of the Harlan’s Holiday mare Miz Kella, Canoodling is owned by B4 Farms, LLC and will be trying a mile and one eighth for the first time while ridden back by Hernandez.  With an overall mark of 16: 8-1-2, she has earnings of $342,023.

A close second in her last two starts, most recently the Santa Ana Stakes (G3) at a mile and one quarter on turf, Going to Vegas has a tremendous resume which includes a head win four starts back in the Rodeo Drive (G1) here on Oct. 2.  Formerly trained by Richard Baltas, she’ll make her first start for D’Amato and be ridden for the first time by eastern-based Irad Ortiz, Jr.

Two for three at a mile and one eighth on turf, Going to Vegas has demonstrated the ability to be on or near the lead or to rally from off the pace.  Owned by Abbondanza Racing, LLC, Medallion Racing and MyRacehorse, she’s got three graded stakes wins to her credit and has five wins and as many second from 13 starts on the Santa Anita lawn.  With an overall mark of 25: 7-10-2 overall, Going to Vegas has earnings of $699,151.

Trainer Leonard Powell’s long fused French-bred Neige Blanche, a winner of three out of her last four races—all at marathon distances on turf, wheels back quickly off a 1 1/4 length win going a mile and one half on turf in the Santa Barbara (G3) on May 14.

A Group 3 winner at age three in France, Neige Blanche has posted five wins from 12 North American starts for Powell and owners Madaket Stables, LLC, Laura DeSeroux, Marsha Naify and Mathilde Powell.  A close fourth in her lone try at the Gamely distance when beaten 2 1/2 lengths in the Grade 1 Del Mar Oaks on Aug. 20, Neige Blanche is 18: 8-0-4 overall with earnings of $480,280.