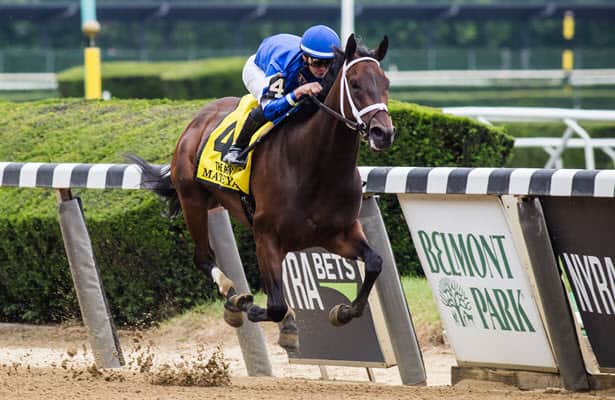 International racing and breeding powerhouse Godolphin, the reigning Eclipse Award winner for outstanding owner the last two years, enjoyed a prominent summer last year at Saratoga Race Course, led by victories from Essential Quality in the Jim Dandy (G2) and Travers (G1), as well as with Althiqa in the Diana (G1).

With the prestigious meet less than three weeks away, the boys in blue appear to have dead aim on more Spa glory with several valuable players on their roster.

Essential Quality and Althiqa have retired, but Godolphin has had no problem filling their void this season, with 10 graded stakes (three Grade 1) wins this year already. On Belmont Stakes Day, Godolphin sent out the Brad Cox-trained sophomore filly Matareya to a stellar 6 1/4-length victory in the Acorn (G1) at a one-turn mile. She was scheduled to face off against last year’s champion 2-year-old filly, Echo Zulu, who was scratched at the gate.

Matareya, a Pioneerof the Nile bay, has won all four of her starts this year by a combined 22 1/4 lengths, which also includes triumphs in the Beaumont (G3) at Keeneland and the Eight Belles (G2) at Churchill Downs. She now will target the seven-furlong $500,000 (G1) Test on Aug. 7 at Saratoga.

“Our early season goal was the Beaumont, the Eight Belles and the Grade 1 Acorn. We thought stretching out to a mile, even though it was around one turn, we would be OK,” said Godolphin USA director of bloodstock Michael Banahan. “As we saw, she handled it exceptionally well. It ended up being a watered down race with the scratch of Asmussen’s filly (Echo Zulu), but you can only run against who’s in there and she was very impressive. We expected her to run like she did and the Test is the next opportunity for her. Seven furlongs at Saratoga should suit her very well, so we’re looking forward to it.”

Matareya saw two turns twice in her career. After an impressive debut victory at Ellis Park, she raced in the Alcibiades (G1) at Keeneland going a two-turn 1 1/16 miles, finishing fifth. Two starts later, she ran a two-turn mile at Oaklawn Park but was no match for subsequent Kentucky Oaks winner Secret Oath.

“She told us what she likes doing and what she’s good at doing. When they’re 2-year-olds, you always dream about having an Oaks filly or a classic-distance type of horse,” Banahan said. “We ran her in the Alcibiades last year and she ran very well in it, but when she hit that last three sixteenths, you could tell that maybe that wasn’t what she wanted to do. We gave her a chance and ran her back in the mile race down at Oaklawn in the wintertime just to confirm which direction we needed to go. When we got run off our feet down there, and not knowing the quality of the filly who beat us that day initially, we were convinced that we needed to go back to one turn. Lo and behold, it was Secret Oath we were trying to beat, so it wasn’t all bad when you look back on it.”

A third generation Godolphin homebred, Matareya is out of the graded-stakes-winning Bernardini mare Innovative Idea. She is a maternal descendant of influential broodmares Caress, Busanda and La Troienne.

“It’s a fast family. Her mother was fast as well,” Banahan said. “We bred her to Pioneerof the Nile, sort of hoping that we would get a horse that would stay a little bit further, but we’re very happy to have a high-class sprinter on our hands.

“She’s progressed in each race she’s run, and each step up she’s been more impressive,” Banahan continued. “She probably didn’t have to be at her best in her Acorn, but I think she would have been well able to run her best had she been pressed in there and I think she’s probably the leading sprinting 3-year-old filly in the country at the moment. We’re looking forward to having a big second half of the year with her, hopefully starting with the Test and the dream would be to head to Keeneland for the Breeders’ Cup.”

Grade 1 winner Speaker’s Corner could target the $600,000 Forego (G1) on Aug. 27 after a third-place finish to Flightline in the Metropolitan Handicap (G1) on Belmont Stakes Day.

Trained by Hall of Famer Bill Mott, the 4-year-old son of Street Sense registered a 114 Beyer Speed Figure – the highest recorded figure this year – when capturing the Carter Handicap (G1) in April at Aqueduct, defeating Reinvestment Risk and multiple Grade 1 winner Mind Control by 4 1/2 lengths in the seven-furlong test.

Speaker's Corner is unbeaten in three starts at seven furlongs, including an allowance win at Saratoga last year where he emerged off a 10-month layoff.

“We’re going to sit back a little bit. For a miler in the second half of the year, there isn’t much of a program set up for them. Obviously, there’s the Carter and the Met Mile in the late spring, summertime, but there aren’t too many mile races until the back end of the year,” Banahan said. “We’ll probably take a look at a race like the Forego. We’ll just let him get back and see what direction we go in. We don’t feel like we want to stretch him out, we tried that last year and he probably doesn’t want to do that the top end. A race like the Forego would probably be our next target.”

Speaker’s Corner is not the only talented one-turn miler Godolphin has this year. Cody’s Wish, also trained by Mott, displayed brilliance at the distance in the Westchester (G3) over a sloppy and sealed Big Sandy on May 7. Unbeaten in four starts at a one-turn mile, the 4-year-old son of Curlin was a three-time winner going a one-turn mile at Churchill Downs last fall.

Banahan said they were contemplating targeting the Met Mile with Cody’s Wish as well but regrouped when the horse spiked a fever. Cody’s Wish has resumed training in Saratoga with no set plans for his next start.

“We were looking a little bit at the Met Mile as well, but he came up with a little temperature. We just have to come up with a game plan for him going forward,” Banahan said. “He’s very similar to Speaker’s Corner in that he’s a one-turn mile type of horse. We’re just going to have a look at the condition book and see what is going to suit him. There was the mile race at Monmouth (Salvator Mile) last week even though it was two turns, but it came up too soon for him. We’ll have to see what happens and see what races are right going forward. He’s doing well and he’s bounced back and we have high hopes that he can have a really good finish to the year.”

Before the Westchester, Cody’s Wish made his seasonal debut in the Challenger (G3) in March at Tampa Bay Downs. He finished a neck behind Scalding, winner of the next-out Ben Ali (G2) at Keeneland, and 2 1/4 lengths ahead of Dynamic One, who captured the Blame at Churchill Downs two starts later.

“At Churchill last year, he rolled off three in a row going a one-turn mile. It seemed like he enjoyed doing that. We ran him at Tampa at the beginning of the year in what turned out to be a nice race, we just didn’t know if he wanted to go much further than that,” Banahan said. “Scalding, who won that race, came back and won the Ben Ali. Both of those horses ran back in the Blame at Churchill and they both were in the first three again. So, those were some pretty nice horses he’s been running against. When we backed him up in the Westchester, he was pretty impressive doing that. I think we have several horses that like that one turn mile distance, so we just have to figure out the best way to separate them and run them where they belong.”

Banahan said graded stakes-winner Nostalgic, a troubled 10th in the Kentucky Oaks, appears to be training forwardly alongside Mott’s string at Saratoga. The daughter of Medaglia d’Oro checked heavily around the five-sixteenths pole and came up empty when shifted to the three path nearing the stretch.

“She got interfered with twice, at the half mile pole and then again as they were coming into the stretch. She’s the type of filly that you can’t really stop her momentum once you get her going,” Banahan said. “She’s back again, doing well and we’ll probably go to the Coaching Club and then the classic distance with her in the Alabama. Knowing that there’s a deep group of fillies, none of the races will be easy but I think she’ll really enjoy the distance. There aren’t that many opportunities for fillies to go that distance so we’re looking forward to the Alabama.”

Nostalgic is out of the stakes-placed Tapit mare Been Here Before and comes from the same family as 2005 Wood Memorial winner Bob and John.