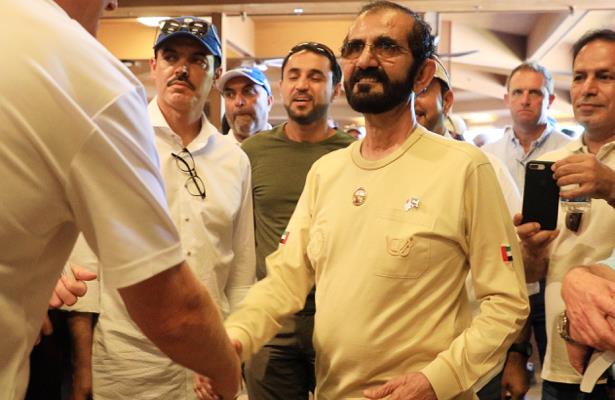 A global rivalry on the racetrack entered Keeneland's sales pavilion on Tuesday, with time seeming to stand still when a Curlin colt out of a champion turf sprinter hung at $3.7 million on the board.

“We were gasping for air at that stage," said Anthony Stroud, a trainer acting as agent for Godolphin.

But Godolphin and Coolmore kept going until Hip 274 hammered for $4.1 million, topping this sale and representing the highest September Yearling Sale acquisition since 2010.

“Luckily, we are under the leadership of Sheikh Mohammed, and he is a decisive man," Stroud said. "He’s completely under control. He is the one who makes these decisions, and in this particular case, he told me to continue.”

It continued an expensive trip to the states for the ruler of Dubai, who minutes earlier went to $2.9 million for a War Front colt out of 2012 Kentucky Oaks winner Believe You Can. On Monday, as the Keeneland sale began, Godolphin also purchased a half-brother of 2016 Kentucky Derby winner Nyquist for $2.5 million to lead the opening session.

Watch as the $4.1 million sale topper, hip #274, leaves the @keenelandsales ring with @gabby_gaudet_.

For each new sales topper, Stroud has signed the ticket and walked over to a gaggle of reporters to discuss Godolphin's latest grab.

“I think the love of horse racing and the hope of finding a champion is the thing," Stroud said of Sheikh Mohammed, who's on hand this week in Lexington, Ky.

Not since Mr. Besilu, who sold for $4.2 million nine years ago, has a horse hammered so high at this sale.

Of course, Sheikh Mohammed is plenty familiar with Curlin, who won the 2008 Dubai World Cup and with eight crops of racing age ranks among America's top sires.

This colt is also out of Bounding, an Australian-bred mare who won at the Group 1 level on her home turf. It had to pique Coolmore's interest that its 2019 Irish Derby (G1) winner Anthony Van Dyck appeared on the catalog page as a foal out of Hip 274's second dam.

It didn't take long to add a new sale topper! $4.1 million for hip 274, the Curlin colt out of G1 winner Bounding (AUS) at #KeeSept. Consigned by @EatonSales1 for @StonestreetFarm pic.twitter.com/jM7g8OCRCB

Eaton Sales consigned the colt for breeder Stonestreet, whose Barbara Banke suggested could extend Curlin's reach in Europe should Godolphin campaign him overseas.

"Or if he stays here," she told TVG, "I hope he tears it up on the Triple Crown trail, because I really believe he's that type of colt."

Learning that he was bidding against Coolmore put Stroud at ease once the hammer dropped.

“They’re incredibly good," he said. "It makes me feel better because they’re so talented at what they do. It’s a huge compliment that they liked the horse, because they’re great people and buy wonderful horses.”