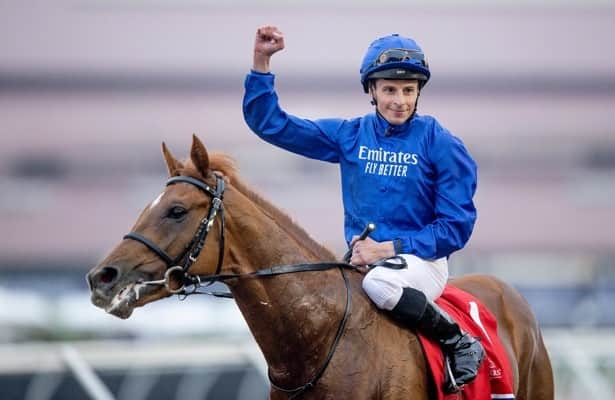 From the Belmont to the Breeders’ Cup, Godolphin made its mark on the U.S. racing scene in 2021.

Listed below are the top 10 owners from 2021 in terms of graded-stakes wins. Such victories earned on the Dubai World Cup or Saudi Cup cards counted toward these totals.

Godolphin is well-positioned to win a fourth Eclipse Award for Outstanding Owner after also taking the honors in 2009, 2012, and 2020. The powerhouse owner-breeder operation won its first Triple Crown race when Essential Quality took the Belmont Stakes, then added three Breeders’ Cup wins to give it 12 all-time. Godolphin also won a ninth Dubai World Cup with Mystic Guide, who is training toward a 5-year-old season.

Klaravich Stables racked up another dozen graded-stakes wins in 2021, all for trainer Chad Brown. Domestic Spending won two of them, including the Turf Classic in a dead heat with the Todd Pletcher-trained Colonel Liam. Search Results took the Gazelle Stakes (G3) and Acorn and came up a neck shy of Malathaat in the Kentucky Oaks.

CHC and WinStar have an exciting duo of 4-year-olds for the 2022 season in Americanrevolution and Life Is Good. Life Is Good won two graded stakes early last season for trainer Bob Baffert, then moved into Todd Pletcher’s barn and won another two, including the Dirt Mile by 5¾ lengths. Americanrevolution, also trained by Pletcher, topped older runners in both the Empire Classic Handicap and Cigar Mile.

Brant teamed up with trainer Chad Brown for a half-dozen graded-sakes wins in 2021, three in Grade 1 flight. Raging Bull finished his career with a trio of Grade 1 wins coming in three different seasons and will stand in 2022 at Gainesway Farm. Brant’s mare Dunbar Road nearly upset the Breeders’ Cup Distaff at 12-1 odds but 50-1 shot Marche Lorraine edged her by a nose.

The Coolmore team won three graded-stakes on U.S. soil last year with Golden Pal, including the Breeders’ Cup Turf Sprint. The Uncle Mo colt is 2-for-2 at the World Championships and trainer Wesley Ward hopes for a third such win this November at Keeneland, his home track. Filly Santa Barbara looked to be a rising star with two Grade 1 wins in two U.S. starts but died in September due to a pelvic injury.

St. George Stable’s six graded-stakes wins came with Letruska, who led all horses in 2021 with her victories in such events. Letruska sports a 23: 17-1-1 record for her career, which began in Mexico before she joined the U.S. racing scene in late 2019. The Super Saver mare will likely be named Eclipse Award winner for top older dirt female, and trainer Fausto Gutierrez plans to bring her back in 2022.