Godolphin: Rebel’s Romance will not be in the Kentucky Derby 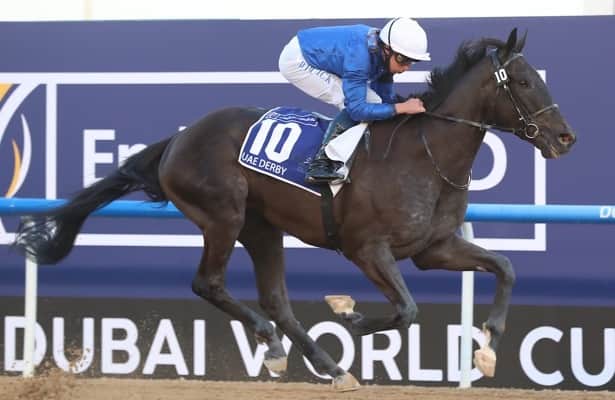 Despite being fifth in the qualifying standings, Rebel’s Romance will not be shipped to Louisville to compete next month in the Kentucky Derby. Instead, he will target the Belmont Stakes.

“Having spoken to His Highness Sheikh Mohammed, we feel he needs more time,” trainer Charlie Appleby said in a Twitter post Wednesday from Godolphin, the breeder-owner of Rebel’s Romance. “He will now be aimed at the last leg of the U.S. Triple Crown.

Recent UAE Derby winner Rebel's Romance will not take his place in the @KentuckyDerby.

Trainer Charlie Appleby said, "Having spoken to His Highness Sheikh Mohammed, we feel he needs more time and he will now be aimed at the last leg of the US Triple Crown, the G1 Belmont S." pic.twitter.com/jqY2xJmb09

A winner in 4 of 5 career races, Rebel’s Romance is a Dubawi colt who qualified for the Kentucky Derby with his 5 1/2-length triumph March 27 in the UAE Derby (G2).

This marks the first time since 2014 that the UAE Derby winner has not taken part in the Kentucky Derby. This year’s runner-up, Panadol, was a late nomination to the Triple Crown and is still considered a candidate to take his place among the 20 horses running for the roses May 1.

Sixteen horses that raced in the UAE Derby also have started in the Kentucky Derby. None finished better than fifth. Rebel’s Romance is the ninth winner in the 21 runnings of the Dubai race that will not race at Churchill Downs.

With Rebel’s Romance joining Greatest Honour, Weyburn and Proxy as being doubtful or removed from consideration, the current leaders in qualifying for the Kentucky Derby are as follows: