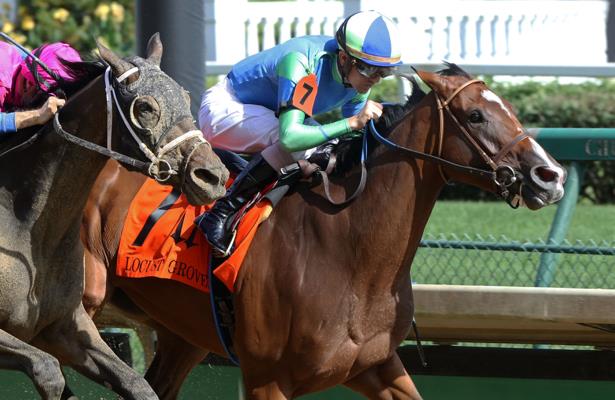 Photo: Coady Photography
Paul McGee-trained Go Google Yourself held off the late challenge of Moonlit Garden to win Saturday’s Grade 3, $200,000 Locust Grove Stakes by a neck at Churchill Downs.
A field of nine fillies and mares went to the post in the Locust Grove, with Mylady Curlin sent off as the even-money favorite. Breaking alertly from the starting gate, Go Google Yourself was settled into third, sitting just behind the leading pair of Skeptic and Escape Clause through the early stages of the race.

Skeptic continued to hold a slight advantage over Escape Clause as the field entered the far turn. Go Google Yourself was shifted out into the four-path on the turn by jockey Brian Hernandez Jr. for a clear run at the leaders.

The trio matched strides briefly as they raced three-wide into the stretch. Go Google Yourself then hit another gear and shot to the front andquickly began to pull away. She easily held off the late challenge of Moonlit Garden to win by a neck. Mylady Curlin rallied in the stretch, but had to settle for third.

“We had a lot of confidence in her going in," McGee said. "I think she’s gotten better and her Beyers have shown that. The way she won at Ellis Park last time, by three lengths going away, she won pretty easy last time out to get her first stakes win. That’s why we were confident going into today.”