Gloryzapper hangs on to win LA Woman in driving finish 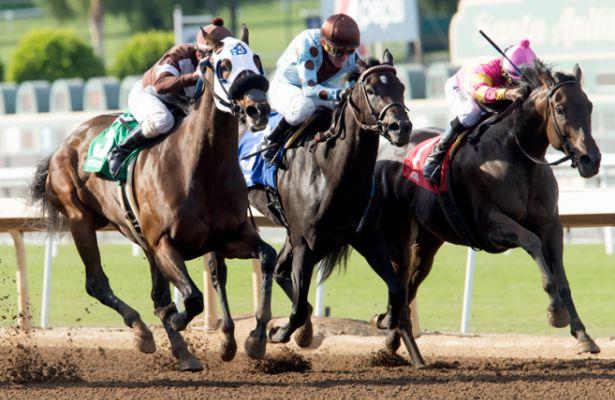 In a driving four-horse finish, Gloryzapper, with Stewart Elliott up, prevailed by a half length in Sunday’s Grade III, $100,000 LA Woman Stakes at Santa Anita.  Trained by Phil D’Amato, Gloryzapper, who went head and head for the lead with eventual third place finisher Perfect Pic throughout, got 6 ½ furlongs in 1:15.75.

Breaking from post position five in a field of eight fillies and mares three and up, Gloryzapper and Perfect Pic set collective splits of 22.13, 45.10 and 1:09.41 as even money favorite Luminance, who broke slowly, could never get on terms with the dueling leaders and finished a close third.

“She’s always a fighter, she always pushes on,” said D’Amato.  “Stewart did a great job.  The four (Luminance) broke a little slow, so Stewart put Gloryzapper into the race early and she fought everybody off.  I love her in this scenario.  When she has her head in front of the rest of the opposition, she love the fight…Passing horses, she’s just ok, but she loves to be in the mix and fight them off.”

Owned by Hebert Bloodstock, Andrew Leggio and Peter Peluso, the Kentucky-bred 4-year-old daughter of Ghostzapper, who came off an eighth place finish going 1 1/8 miles on turf in the Grade II John C. Mabee Stakes Sept. 4, notched her first stakes win in career start number eight.  She now has four overall wins and with the winner’s share of $60,000, she increased her earnings to $225,045.

“She ran really well in her last out, but she just didn’t have that turn of foot on the grass, like grass horses do,” said Elliott.  “With the way she ran today…She got tested and she fought to win, so I could see the Breeders’ Cup as a possiblily.”

(D’Amato indicated that the Grade I, $1 million Breeders’ Cup Filly & Mare Sprint, at Santa Anita on Nov. 5, is under consideration).

Ridden by Mike Smith, Wild At Heart broke from the rail and sat just in behind Perfect Pic until the furlong pole.  At that point, “Perfect” drifted out a bit, which enabled Wild At Heart to surge late, but she had to settle for second, finishing a half length in front of Perfect Pic, who was ridden by Santiago Gonzalez.

Luminance, trained by Bob Baffert, came off a stirring second condition allowance win on July 27 and looked like the horse to beat in the LA Woman.

“She broke a little slow, so I didn’t have the position I wanted to have early,” said Bejarano, who was aboard for the July 27 win.  “She tried really hard, but those fillies didn’t stop.”