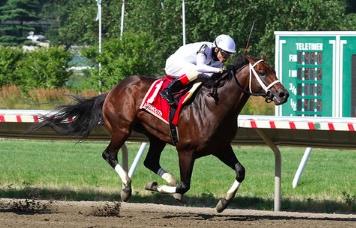 An equipment change and key late scratch proved to make all the difference for Global Campaign in the Grade 3, $300,000 Monmouth Cup at Monmouth Park on Saturday.

A homebred for WinStar Farm, Global Campaign raced for the first time without blinkers and jockey Jorge Vargas used the inside post to his advantage, taking the field all the way on the front-end and then fending off Math Wizard late. Trained by Stanley Hough, he paid $7 to win.

"He was kind of rambunctious as a 3-year-old last year and he’d look around and get distracted so I kept the blinkers on him," Hough said. "But I never felt he really needed them. I just thought it would let him see around a little by taking them off for this race. I’ve been working him without them so he was used to it again. He’s shown from the start that he’s a good horse. He’s well-bred and gosh he has so much talent. He has kind of been his own worst enemy. But he is finally maturing and maybe we can build from here."

The whole complexion of the race changed before it even started when the speedy Bodexpress was scratched at the gate.

With the scratch of Bodexpress, Joevia was the only runner to put pressure on Global Campaign early. Turning for home however; it looked like Joevia had done enough to soften Global Campaign as Bal Harbour and Math Wizard started to mount bids.

Vargas, who picked up his first win of the meet, felt confident in his colt throughout.

"When I asked him a little bit he jumped on the bit and he had something left. He was very strong. I just moved to Monmouth Park for the summer for the first time this year and this is my first win of the meet so it’s pretty special.”

#1 Global Campaign (5/2) would not be denied in the Monmouth Cup (G3) pic.twitter.com/BQILGOA2GF