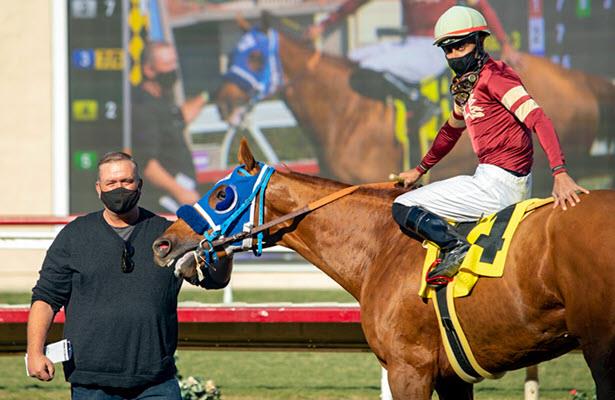 Asked whether the countdown days to the milestone win — from 990 to 1,000 — were nerve-wracking or business as usual, trainer Mark Glatt went with the latter.

“You do think about it when you’re a few wins away, and when you enter (horses) you have a pretty good idea of what your chances are,” Glatt said. “I knew we were getting close, and I thought that maybe it would happen sooner than this because we’ve had a tremendous amount of seconds this year as it turns out.

“I knew it was going to happen, and I was just looking forward to when it did.”

Win No. 1,000 happened for Glatt in Friday’s third race at Del Mar, when Zestful ($6.40), with Edwin Maldonado in the irons, went wire to wire as the second choice in the betting and was 2 1/2 lengths clear of favored Potantico at the wire in the 1 1/8-mile allowance/optional claimer.

“I thought this horse had a really good chance,” Glatt said of his only representative on the eight-race card. “On paper it looked like he could get a pretty easy lead, which he did, and luckily the other riders left him alone. When he gets that kind of trip, he can be double tough.

“Also, it was his first start off a long layoff, which is oftentimes a horse’s best start.”

If, outwardly, Glatt took the milestone victory in stride, his responses in interviews afterward showed how he valued it inwardly.

“It is real important and a very nice accomplishment,” Glatt said. “We work extremely hard to train and race these horses, and there are a lot of ups and downs. This is certainly an up, and we’re going to enjoy it.

“The big ones (race wins) you remember more, but they all count and they all feel the same in that moment when your horse crosses the finish line first.”

Glatt, 47, grew up on a farm in Auburn, Wash., about 30 miles south of Seattle. His father, Ron, was a racehorse trainer across the Northwest. He worked as an assistant to his father and others, took out his training license soon after graduation from Western Washington University at the age of 21, and has gone from the Pacific Northwest to Northern and then Southern California circuits, the last move coming in 2000.

“I grew up with horses, and I knew at a very young age that there wasn’t going to be anything else that I really wanted to do,” Glatt said. “This isn’t going to a factory and doing the same thing day after day. A new challenge is almost a daily occurrence. It’s the love of the horses that keeps us all going and to get to work with horses and be outdoors — how can you beat it?”

Glatt was dutiful in pointing out that it was not an individual accomplishment.

The beauty of recording No. 1,000 at Del Mar was that his entire family was able to be on hand to witness it.

“There are times when I’ve got to be away at a sale or something, and the most important thing is I was able to be here and have my family here with me,” Glatt said.

But a family celebration was not in immediate plans.

“This is kind of a tough time of the year,” Glatt said. “I’ve got a lot of workers (this) morning at Santa Anita and then I’ve got to get back down here because I’ve got six entered here in the afternoon.

“So we’ll be on the road a lot. Maybe Sunday evening we’ll find time to celebrate.”