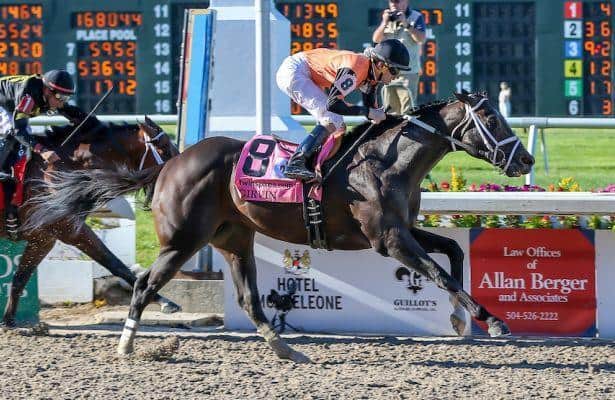 Photo: Steve Dalmado/Eclipse Sportswire
With less than three weeks remaining until Monmouth Park’s marquee event, the Grade 1, $1 million betfair.com Haskell Invitational on July 30, another top 3-year-old has confirmed their next run will be at the Jersey Shore. Multiple graded stakes winner Girvin will head to the starting gate against another top notch field of runners in this year’s golden anniversary of the Haskell.
Girvin took home both the Grade 2 Risen Star and the Grade 2 Louisiana Derby in late-running fashion at the Fair Grounds on his way to a run in the Kentucky Derby earlier this year.  The son of Tale of Ekati out of Malibu Moon mare Catch the Moon just missed to Irap in the Grade 3 Ohio Derby at Thistledown on June 24.
“He arrived at Saratoga this morning,” said trainer Joe Sharp, who conditions the horse for Brad Grady. “We’ll get a work or two into him up here prior to the Haskell and ship down a couple of days before the race. I’d like for him to get a look and feel for the track, maybe school in the paddock before the race just to get to know his surroundings.”
Girvin has already worked once since the Ohio Derby in preparation for the Haskell. The bullet came on July 9, when he went four furlongs in :47 1/5, fastest of the 22 horses that went the distance at Churchill Downs Training that day.
From six career starts, Girvin sports a record of 3-2-0 with nearly $1 million in earnings.  The Kentucky bred is a winner at the mile and an eighth Haskell distance.
Along with Girvin, the likely contenders for the 50th renewal of the betfair.com Haskell Invitational include:

Ø      Battle of Midway – third in the Kentucky Derby, he captured the Grade 3 Affirmed Stakes at Santa Anita on June 24.

Ø      Timeline, Practical Joke – From the Chad Brown barn, Timeline is a perfect four-for-four and a winner at Monmouth after capturing the Grade 3 Pegasus last out, while Grade 1 winning Practical Joke won last year’s Champagne Stakes and last out took the Grade 3 Dwyer at Belmont on July 8.

Ø      McCraken – most recent winner of the Matt Winn Stakes, this Ian Wilkes trainee is a multiple graded stakes winner.

Ø      Hence- winner of the Grade 3 Sunland Derby on the road to his run in the Kentucky Derby. Most recently won the Grade 3 Iowa Derby on July 7.

The Haskell Invitational will air live on NBC from 5 to 6 p.m.  Admission that day is $8 Grandstand ($4 seniors) and $10 Clubhouse ($5 seniors). Select reserved seats remain and can be purchased by contacting 732-571-5563.  All paid admissions will receive the commemorative Haskell hat, while supplies last.

The betfair.com Haskell Invitational is a Breeders’ Cup Win & You’re In event with the victor earning an automatic berth to the $6 million Breeders’ Cup Classic at Del Mar on Nov. 4.