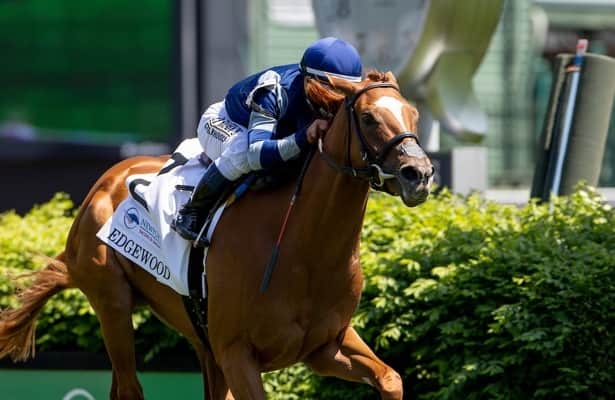 Gift List, who went off as the 4-1 second choice, pulled off the upset of previously undefeated Aunt Pearl in the $300,000 Edgewood (G2). Javier Castellano was in the irons for the Bated Breath filly, trained by Brian Lynch.

The 1 1/16-mile race on the turf at Churchill Downs on Kentucky Oaks day was the filly’s second race in the U.S. She finished second in her most recent trip in the April 3 Appalachian (G2) at Keeneland.

“Our filly was ready today and got it done” Lynch said after the race. “So very proud of her”

The 1-5 favorite Aunt Pearl, trained by Brad Cox and winner of the Breeders’ Cup Juvenile Fillies in her most recent race, came out of the gate well to take an early lead in the race, being challenged by Zaajel through the early going.

Gift List came running out of the far turn, took the lead at the top of the stretch and widened the gap to earn the win with a final time of 1:41.94. Aunt Pearl finished fifth.

Lynch said he was looking forward to the future with Gift List.

“She gave us plenty of high hopes today,” the trainer said, adding that he will likely point her towards New York for the rest of the year.