Get Her Number gets it done in American Pharoah 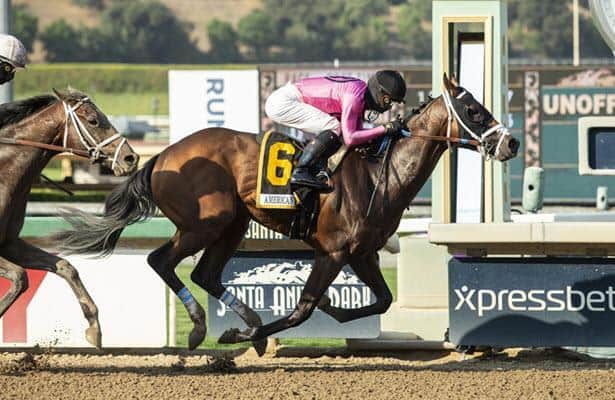 Trying dirt for the first time, Gary Barber's Get Her Number took control on the far turn and held sway over a stubborn Rombauer in the stretch to win the Grade 1, $300,000 American Pharoah Stakes at Santa Anita Park on Saturday, which is an automatic qualifier to the Breeders' Cup Juvenile.

Sent off the 8-1 fifth choice in a seven-horse field, Get Her Number stalked outside of longshot pacesetter Dyn O Mite through opening fractions of :23.12 and :47.07 for the 1 1/16-miles American Pharoah. Even-money favorite Spielberg, a $1 million auction purchase for trainer Bob Baffert, stalked the pace in third along the inside of what was a bunched up field down the backstretch.

Get Her Number overtook Dyn O Mite for the lead at about the three-eighths pole and took the field into the stretch after six furlongs completed in 1:12.46. While Spielberg never got any closer in his first try around two turns, the lone threat to Get Her Number was Rombauer, who had launched from last under Hall of Famer Mike Smith with an outside move to draw into contention. It proved not enough, however, as Get Her Number was kept to task under Flavien Prat to win by by three-quarter lengths on the wire.

“We had a good trip; he broke well and he put me in the race," Prat said. "He reacted well on the backside and by that point I felt in control.

“It is great, Breeders’ Cup is always something we all look forward to so it’s cool.”

#FutureStarsFriday calling! ?? Get Her Number wins the American Pharoah Stakes and qualifies for the @TVG #BreedersCup Juvenile presented by @TBaftercare! #WinAndYoureINpic.twitter.com/xGjitZEPFN

Trained by Peter Miller, Get Her Number completed the trip on a fast track in 1:44.92 while rewarding his backers with an $18.20 win mutuel. Rombauer was followed across the wire by Spielberg with Waspirant completing the superfecta.

A $45,000 auction purchase, Get Her Number is the first Grade 1 winner for sire Dialed. In two previous starts on turf, he won on debut going five furlongs at Del Mar on Aug. 14 and came back to be fourth, beaten just a length, when stretched to a mile in the Del Mar Juvenile Turf most recently.

“We wanted to see how the horse could do in the grass so we decided to give that a shot," said Miller's assistant, Ruben Alvarado. "There wasn’t anything too quick for him on the turf. We had to take close to a month before coming back to this race. We went back to the dirt and gave him a couple workouts that went well, so we decided let’s do it and see if we get lucky or not."