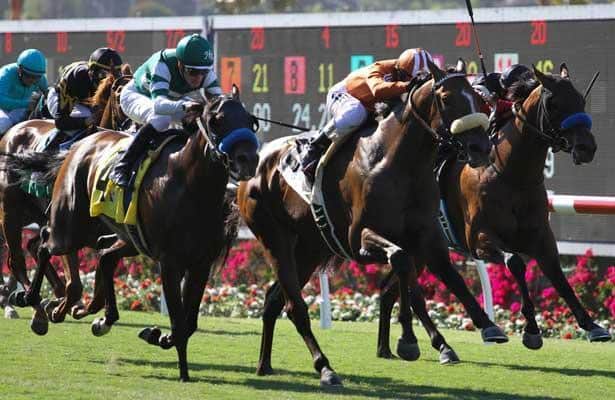 Devoid of a clear-cut standout, Thursday’s Grade II, $200,000 Sir Beaufort Stakes, for 3-year-olds at one mile on turf, attracted a field of 10 and it appears to be headed by California-bred Gervinho, who has two wins and a second at a mile on grass.  The bay colt by Unusual Heat cuts back in distance after running a close fourth in the Grade I, 1 ¼ miles turf Hollywood Derby Dec. 1.

Gervinho’s last win came in the one mile turf restricted Oceanside Stakes on July 17.  Subsequent to that, he was a close second and third in a pair of Grade II 1 1/8 mile turf stakes, the Del Mar Derby on Sept. 1 and the Twilight Derby at Santa Anita on Nov. 1.

Trained by Carla Gaines and owned by Keith Brackpool, Gervinho retains the services of Rafael Bejarano, who has been aboard for all three of his career wins.  With $302,140 in earnings, the consistent Gervinho is 8-3-2-1 overall.

Glen Hill Farm’s Procurement, a winner of Santa Anita’s La Puente Stakes at 1 1/8 miles on turf April 21, comes off a sharp allowance score at a mile on turf at Betfair Hollywood Park on Nov. 28 and rates a big chance in the Sir Beaufort with Joe Talamo again engaged to ride.

Trained by Tom Proctor, the Florida-bred colt by Milwaukee Brew has enjoyed a productive 2013, winning three times and running second once from 10 starts.  With two wins and a second from three tries at a mile on grass, Procurement is a proven commodity under the Sir Beaufort conditions.  With a 15-4-1-1 overall mark, he has $201,809 in earnings.

Trainer Simon Callaghan will be well represented in the Sir Beaufort as he sends out No Jet Lag, who, following one mile turf wins in his first two U.S. starts, ran a respectable sixth, beaten six lengths by likely two-time Horse of the Year Wise Dan in the Grade I Breeders’ Cup Mile on Nov. 2.

A Kentucky-bred gelding by Johar, No Jet Lag earned a lofty 105 Beyer Speed figure in taking the Grade II City of Hope Mile (turf) two starts back at Santa Anita Oct. 5.  Owned by Anthony Ramsden, No Jet Lag will be ridden for the first time by Joel Rosario.  Campaigned in England for his first seven starts, No Jet Lag is 10-4-1-0, with earnings of $148,782.

Hall of Fame jockey Mike Smith, who rode No Jet Lag in his last two starts, will instead be aboard the hard-hitting Tom’s Tribute in the Sir Beaufort.  Trained by Jim Cassidy, the Kentucky-bred colt by Lion Heart comes off a 2 ¼ length score in the Uniformity Stakes at 6 ½ furlongs down the hillside turf course Oct. 20 and is bidding for his third consecutive win.