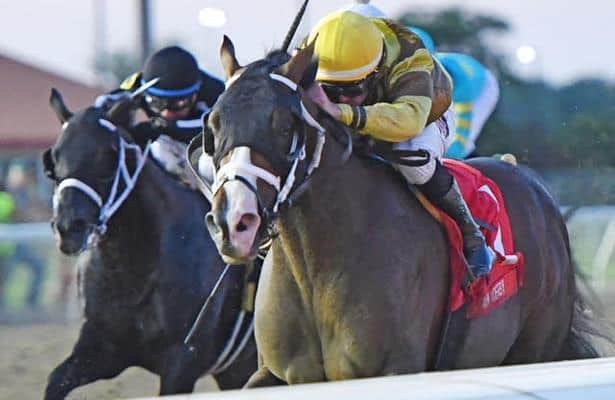 Born in Normandy, France, Geroux was a top apprentice in France in 2005 and has steadily ascended to the highest echelon since relocating to the United States a decade ago.  He is currently ranked third in earnings, according to Equibase, behind the prolific brothers, Jose and Irad Ortiz.

“I’ve ridden him several times; he’s a very nice horse,” said Geroux. “Maybe the only disappointing race was the Peter Pan (at Belmont last May). It might have been a little long for him, but he ran big in the Iowa Derby.”

While Sunday marks his first appearance at Louisiana Downs, there is a compelling Super Derby connection this weekend for Geroux. On Saturday, he will ride 2017 Super Derby champion Mr. Misunderstood in the $750,000 Tourist Mile at Kentucky Downs. The noted turf specialist will be seeking his seventh stakes win since his victory here one year ago for trainer Brad Cox and his owner, Staton Flurry.

“For sure the Super Derby was great for Mr. Misunderstood,” said Geroux. “He’s been an amazing horse for Brad and Staton.”

Geroux won the 2016 and 2017 leading rider titles at Fair Grounds, and completed this year’s meet as the top money-earning jockey at the New Orleans racetrack.

Always popular with horseplayers, Geroux jetted to Sam Houston Race Park last January, the morning after winning the $16 Million Pegasus World Cup at Gulfstream Park aboard Gun Runner. Most riders might have preferred to remain in the jocks room and catch a quick nap, but Geroux graciously did interviews and signed autographs for racing fans.

“You have to support the fans,” he said. “They are very important to our sport and I always try to meet them when I can.”

The 39th running of the Super Derby is set as the eleventh race of the card, with an approximate post time of 5:05 p.m. CT. The complete field, in post position order, with riders, and odds:

In addition to the Super Derby, six additional stakes will be contested on Sunday’s program.