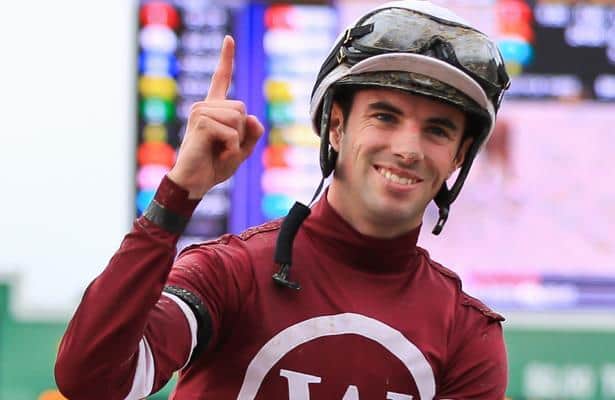 See who's hot, and who's not, with the Jockey Report

Bredar did not mince words about the change.

"He fired me," he said. "Virtually everything he ever accomplished was with me."

Unfortunately good things come to an end. I'll work w/ @flothejock through BC,proud of what we accomplished,grateful for horsemen trusting us w/ great horses. 13 years,7th in NA. Amazing run beyond all expectations. Apparently grass looks greener on the other side of the fence.

The first of 43 Grade 1 wins together came with Work All Week in the 2014 Breeders' Cup Sprint. Six more Breeders' Cup wins followed as did a Kentucky Derby win in 2021 with Mandaloun via the disqualification of Medina Spirit.

Brad Cox trains Mandaloun, and most of Geroux's success has come with that trainer, including 18 of those Grade 1 wins. But his best mount is Horse of the Year Gun Runner for Hall of Fame trainer Steve Asmussen.

Panagot is also Manny Franco's agent, and he said that will not change. Geroux will ride at Churchill in the fall and Fair Grounds in the winter, and Panagot will book for Franco at Aqueduct and Gulfstream.

"There are probably five days a year where they're riding in the same place," Panagot said of booking mounts for both Geroux and Franco. "Although hopefully the first Saturday in May is one of them."

Because of the live racing schedule in Kentucky, there will be some overlap between the two agents. Bredar is booking for Geroux at Keeneland, including the Breeders' Cup World Championships Nov. 4-5 in Lexington. And the Churchill Downs fall meet begins Oct. 30 with racing in Louisville Nov. 2-3 before resuming Nov. 6.

Geroux's most recent success was aboard Society in the Cotillion Stakes (G1) for Asmussen. Geroux has 23 Grade 1 wins the last five years, and 17 have come for Cox.

Bredar said he did not have a replacement lined up but that he is open to opportunities either with another jockey or in racing management.