Geroux doubles up as Social Paranoia rallies in Gulfstream’s Appleton 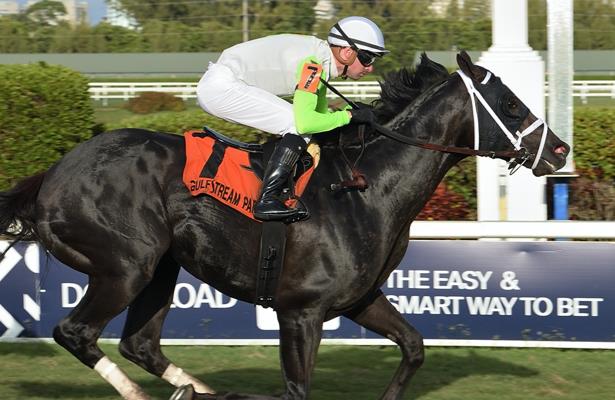 Jockey Florent Geroux, in a pickup mount from Javier Castellano after the Hall of Famer tested positive this week for COVID-19, took advantage when guiding Social Paranoia from last to first in Gulfstream Park’s $100,000 Appleton Stakes.

Geroux was a length and a half clear of the closest pursuer a race after he upset with Bemma’s Boy in the Pan American (G2), both on the Florida Derby (G1) undercard.

Social Paranoia, a 4-year-old son of Street Boss, prevailed off the layoff in what was his second straight stakes win dating back to Kentucky Downs’ Dueling Grounds Derby last September.

“I thought he got a little too far back early on, but it worked out well,” said trainer Todd Pletcher. “He delivered a big closing kick. He’s a horse we’ve always liked a lot, a lot of quality, beautiful horse. It was nice to see him get back under way today.”

Pletcher trains for The Elkstone Group and also conditions runner-up Sombeyay, another newly older horse rising up the ranks in the turf mile division.

Social Paranoia rallied off a snappy 46.37-second half mile set by Dr. Edgar. After that one faded through the far turn, Maraud inherited the lead. It didn’t last long as an open race ensued at the top of the lane, with Social Paranoia sweeping down the center of the track.

Incredible! Social Paranoia and @flothejock come storming down the outside to win the Grade 3 Appleton Stakes at @GulfstreamPark for @PletcherRacing ?? pic.twitter.com/v9Ak1XdRZC

Behind the top two was beaten favorite March to the Arch. His rider, Tyler Gaffalione, lodged an objection against the winner claiming Geroux interfered in deep stretch. That was disallowed by stewards.

The colt, who needed six starts to break his maiden, went on from there to appear in a number of premier 2019 events for 3-year-olds on the turf. He improved Saturday to 3-4-4 in 11 starts.