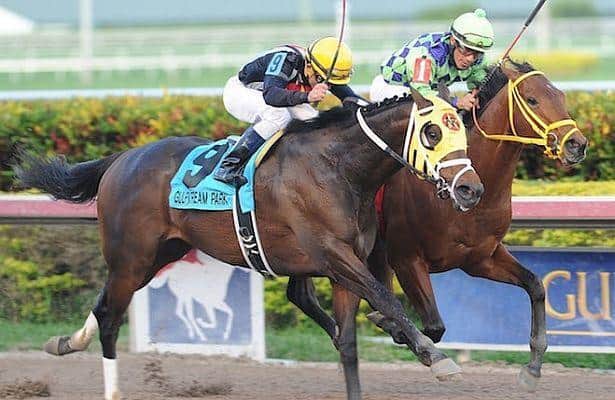 Belmont Stakes contender General A Rod galloped over the main track at 5:45 this morning, his time over the Belmont Park course since arriving from trainer Mike Maker's Louisville, Ky. base Thursday evening.

"The plane was a little late getting in, but he ate up well and settled right in, and galloped nice this morning," Sharp said. "He looks great. He came in and didn't have a hair turned."

Today was the first look at Belmont's unique 1 ½-mile surface for General a Rod, who has raced at Keeneland, Churchill Downs, Gulfstream and Pimlico in his seven-race career. He was second in the Grade 2 Fountain of Youth, third in the Grade 1 Florida Derby, and fourth in the Preakness.

"He took it all in stride. It was just an ordinary day for him, and he seemed real happy," Sharp said. "It seems like good horses just seem to get it. We just want to bubble-wrap him and keep everything on track for tomorrow."

Maker arrived in New York early this afternoon for his second shot at the Belmont, having finished seventh with Stately Victor in 2007. He was an assistant to D. Wayne Lukas when the Hall of Fame trainer won each of his four Belmonts: Tabasco Cat (1994), Thunder Gulch (1995), Editor's Note (1996) and Commendable (2000).

"You never know until you try it," Maker said. "The pace will be slower, so I don't forsee any trouble with the extra distance. In the Derby and the Preakness, he had no problem. He had a strong gallop-out in the Preakness, so I'm not too concerned about it."

Purchased prior to the Kentucky Derby from original owner J. Armando Rodriguez, for whom the horse is named, General a Rod was a troubled 11th at Churchill Downs and got shuffled back again at Pimlico, beaten just a head for third.

Maker said the Belmont didn't come into focus until about 10 days after the Preakness, after he watched the horse and discussed options with the owners, Skychai Racing and Starlight Racing.

"My theory was that the horse couldn't be doing any better," he said. "He had a bad go of it in the Preakness, and I kind of passed the ball to them. I said, 'I can't give you any reason not to run,' and here we are. They came out and saw what I saw, and they were excited to have the opportunity to run. We have a happy, healthy horse, and they were on board to give it a shot."

General a Rod joins Kentucky Derby and Preakness winner California Chrome and Preakness runner-up Ride On Curlin, who was seventh in the Derby, as the only horses to compete in all three legs of the Triple Crown. On May 31, General a Rod had a bullet five-furlong work in 1:00.20 at the Churchill Downs training center.

"It's a tribute to his soundness, I guess," Maker said. "We have a lot of confidence going into this race. I'd love to be the spoiler, that's for sure."