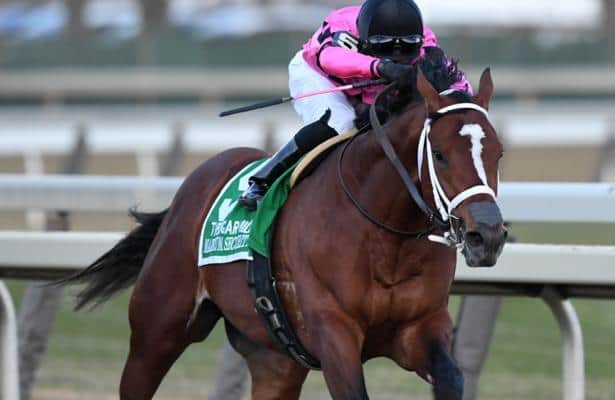 Maximum Security owner Gary West says that in the wake of doping allegations against former trainer Jason Servis, the reigning 3-year-old champion colt will undergo "the most advanced and comprehensive scientific and medical testing ... known to man."

In a statement provided Sunday to Paulick Report, West said he was "stunned" to learn that Servis was among 27 people arrested Monday on federal charges of illegal horse doping.

West said he retained the renowned Dr. Larry Bramlage to perform the testing.

"I have placed no restrictions or limitations of any kind on how, why, or what in his judgment is necessary to exhaustively examine Maximum Security from hoof to tail," West said in the statement. "He is to leave no stone unturned. Dr. Bramlage also has complete discretion to coordinate his examination with any other experts of his choosing."

West said hair, urine and blood samples were sent to a lab in Paris, France, before Maximum Security shipped to Saudi Arabia, where he won the $20 million Saudi Cup last month. He is requesting that the lab test for SGF-1000, "the substance in question" in the federal charges.

Bramlage is a partner in Rood & Riddle Equine Hospital in Lexington, Ky. West said he authorized the veterinarian to release his full report to the general public and to any government authority that requests a copy.

“My job is not to try to find any drugs,” Bramlage said in an interview with the Thoroughbred Daily News. “I’m just looking at the horse to assess the health of the horse. Obviously, you can’t expect to find anything wrong the way he ran. He just wants to know and document that no harm has been done to the horse.”

Bramlage also will work with West's racing manager to collect samples from his horses previously trained by Servis. "This is our best contemporary option to assess the status of our horses previously in training with Jason Servis," West said in the statement.

"Finally," West wrote, "I am making a formal request of the proper authorities to have all of Maximum Security's previous tests in all graded stakes races be retested to determine if there was SGF-1000 in any of those tests."

Last week, as the dust settled from federal indictments unsealed Monday, a co-owner of Midnight Bisou, second in the Saudi Cup, said he "would expect" Maximum Security to be disqualified from his victory.

“At this time we are following the news as everyone throughout our industry,” Jeff Bloom’s statement read further. “We are of course deeply concerned and frustrated of the apparent cheating and blatant disregard for the equine athletes that has been pervasive for all the accused in the federal indictments."

Rising from a one-time claimer to fame, Maximum Security has been beaten across the wire just once in 10 career starts, with his resume also including victories in the Florida Derby (G1), Haskell Invitational (G1) and Cigar Mile (G1).

Maximum Security, campaigned with West and Coolmore, will transfer to trainer Bob Baffert upon his return to the racetrack.