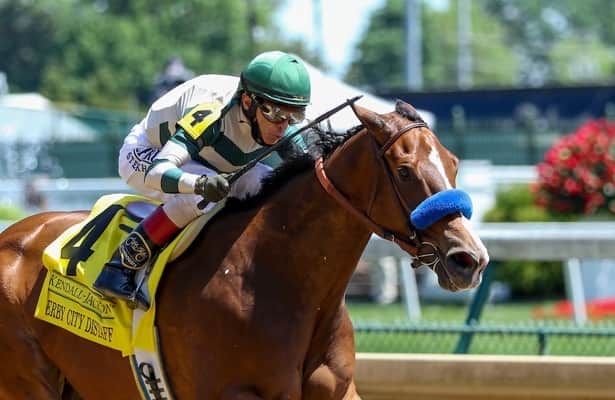 Gamine went off as the 1-5 favorite in the Grade 1, $500,000 Derby City Distaff on Saturday and showed why, earning the fifth stakes victory of her career for trainer Bob Baffert in the seven-furlong trip on the main track at Churchill Downs.

Gamine gets the job done in the Derby City Distaff (GI) w/ jockey @ljlmvel aboard. The 4yo daughter of @spendthriftfarm stallion Into Mischief is now 7-for-8 lifetime.

Congrats to @BobBaffet on his 220th Grade 1 victory.

The 4-year-old Into Mischief filly got out to the lead quickly despite bobbling at the start, and held on throughout despite a challenge from Sconsin, wiring the field to get the victory by 1 1/2 lengths with John Velazquez in the irons.

"You want to feel good, go put $2 to win, it'll cheer you up for the day because you can count on her," Hall of Fame trainer Bob Baffert said after the race. "She came through today.

The win was Baffert's 220th in a Grade 1 race, passing D. Wayne Lukas for most all time.

"To do it here, it's special on a big day like this," Baffert said.

The filly entered the race off an April 4 victory in the Las Flores (G3) at Santa Anita. Her lone career loss came in the 2020 Kentucky Oaks, when she crossed third and was then disqualified to ninth.

Sconsin's jockey, Irad Ortiz Jr., said the Greg Foley trainee ran the race he wanted but that it just was not enough.

"She did make a good run, but that one still had something in the tank," Ortiz said. "Honestly, she's a really nice filly. Just got beat by a nice one."