Gamine could be headed to Saratoga for Coaching Club American Oaks 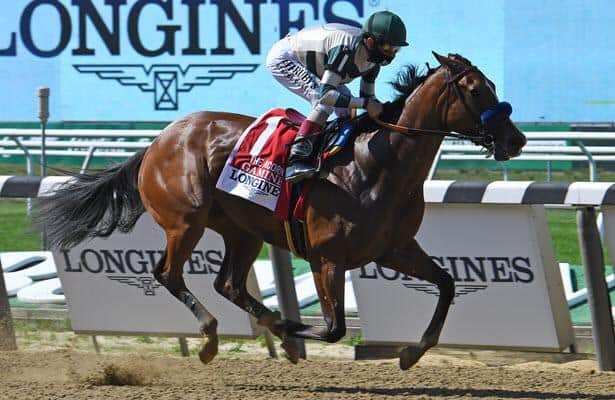 Hall of Fame trainer Bob Baffert was pleasantly surprised to see Gamine bounce out of her sensational 18 ¾-length domination of last Saturday's Grade 1 Acorn as quickly as she did.

Baffert, a five-time winner of the one-turn mile event at Belmont Park, said the Grade 1, $1.25 million Kentucky Oaks on September 4 at Churchill Downs is the long term goal for the Into Mischief bay, but that he would like to race once more before the prestigious event with a trip to Saratoga a possibility for his filly. The nine-furlong Grade 1, $350,000 Coaching Club American Oaks is slated for July 18 at Saratoga.

Owned by Michael Lund Pedersen, Gamine arrived at the Acorn off a win on debut at Santa Anita and a two-turn victory against winners at Oaklawn Park.

"For as fast as she ran, she looks really good," Baffert said. "It really wasn't as hard as I thought as it would be on her. After the Oaklawn race she came back and was a little light on me, but this time she came back looking really well. So we're excited about her. I haven't really thought of a next race for her. I'd like to find one race before the Kentucky Oaks, I just don't know yet. I may have to come back to Saratoga."

#1 Gamine runs off the screen at 3/5 in the fastest Acorn Stakes (G1) ever with @ljlmvel up for @BobBaffert pic.twitter.com/ojL5gQ32iT

Bred in Kentucky by Grace Thoroughbred Holdings, Gamine was purchased for $1.8 million from the Fasig-Tipton Mid Atlantic 2-Year-Olds in Training Sale last May. She is out of the stakes-placed Kafwain broodmare Peggy Jane.