Gamine draws off to another emphatic score in Test 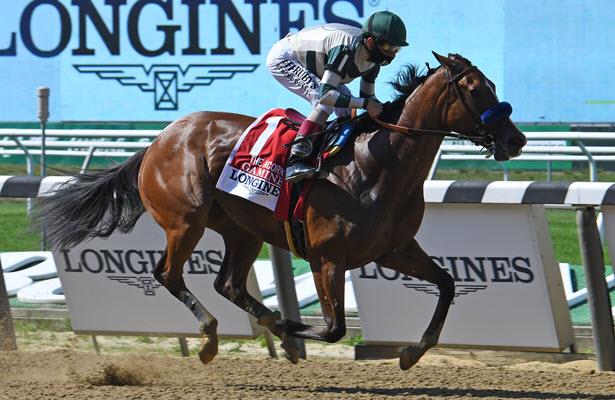 Many jaws hit the floor when Gamine decimated her rivals by more than 18 lengths in the Grade 1 Acorn at Belmont Park for trainer Bob Baffert. While her margin of victory was not as large in Saturday's Grade 1 Test Stakes at Saratoga, the matter in which she won may have been even more impressive.

The anticipated showdown between Gamine and Grade 2 winner Venetian Harbor did not take long to commence. Both fillies broke well and Venetian Harbor would not let the 1-5 favorite out of her sights.

Gamine had a narrow lead while traveling the opening half mile :45.14. Any question she may bounce following the extraordinary Acorn effort was answered in resounding fashion by Gamine when jockey John Velazquez asked her to run turning for home.

The daughter of Into Mischief shrugged off the talented Venetian Harbor after taking her best shot and drew off in the stretch to complete seven furlongs in hand in a blistering final time of 1:20.83.

"Obviously, she's very good,"Velazquez said. "You love to be on these kinds of horses...It feels as good as the [Acorn], I'll tell you that. Whatever the time was or how much she won by, it doesn't matter. She's still as good, and that's what counts."

Gamine has crossed the wire first in all four starts for owner Michael Lund Peterson and trainer Bob Baffert. However, she was disqualified from an allowance win at Oaklawn Park this spring for an overage of Lidocaine, which is a regulated medication in horse racing. Venetian Harbor finished a distant second, well clear of Up in Smoke in third.

Grade 1 winner Speech has been the only horse to come within six lengths of Gamine when narrowly losing to her in the aforementioned Oaklawn Park allowance in May.

Baffert said this week that the timing of this year's Kentucky Derby on Sept. 5 would make it possible for Gamine to run in that race, but quickly stated that the Kentucky Oaks a day earlier for 3-year-old fillies is far more likely of an option.

"She's rising straight to the top," said Baffert's assistant, Jimmy Barnes. "For what she's accomplished so far for such a lightly raced filly, we look forward to stretching her out and see what comes of that."