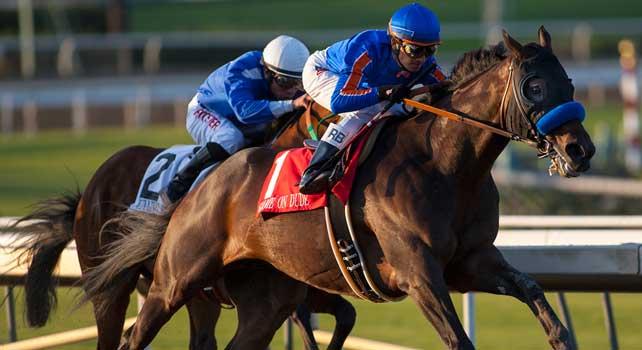 The home team is looking pretty powerful for the Breeders' Cup.

Hall of Fame trainer Bob Baffert and Rafael Bejarano teamed to win three of the five Grade 1 stakes worth $250,000 each at Santa Anita on Saturday, including the Awesome Again with Game On Dude before an on-track crowd of 17,565.

The 5-year-old gelding earned an automatic berth in the $5 million Breeders' Cup Classic on Nov. 3 at Santa Anita, a race he finished second in last year at Churchill Downs.

"I was hoping for this kind of outcome," Baffert said. "They were all coming into their races really well. We still have a ways to go, and as long as they all stay healthy and keep moving forward, that's the main goal."

Game On Dude returned to the winner's circle under new jockey Rafael Bejarano after they won by 3 1/4 lengths.

The gelding improved to 5-0 at his home track for Baffert, who replaced Chantal Sutherland with Bejarano after Game On Dude lost the Pacific Classic by a half-length last month at Del Mar.

Berths in various Breeders' Cup races were awarded to all the winners. Bejarano capped his day by winning the $70,000-added Unzip Me Stakes.

"The break was really important for him," Baffert said. "Sometimes he wants to get a little edgy in the gate, but he broke really well. Plan A was if he breaks well, don't move on him. He found a seam right away and got him to the outside. They slowed it down, so he just sat there and waited, then asked him to run in the stretch. It was the prep that you want for a horse like this."

Bejarano is the top rider for Baffert's stable, and the trainer said he made the change because he wanted his No. 1 jockey on his top horses. Sutherland had no mounts on Saturday.

"He handles the pressure really well. When you're 1 to 5, he knows just keep him out of trouble and let them run their race," Baffert said. "If they win, they win. If they get beat, give them a chance."

Bejarano returned a day after escaping serious injury when he was thrown in the fifth race Friday.

"My horse broke so fast from the gate that I let the other horse (Winning Machine) send a little bit to make sure I could hold my horse and put him in better position," the jockey said. "After the race was done because he was much the best horse in the race."

Kentucky Derby and Preakness-winning trainer Doug O'Neill, who oversees Richard's Kid, had to settle for a second and a third in the Grade 1 races a day after returning from a 40-day suspension.

"Our horse was last the whole way and then made up ground to finish third," said Leandro Mora, O'Neill's assistant. "I know the winner is a game horse who likes to go wire-to-wire. If somebody doesn't fight him on top of it, he's a champion."