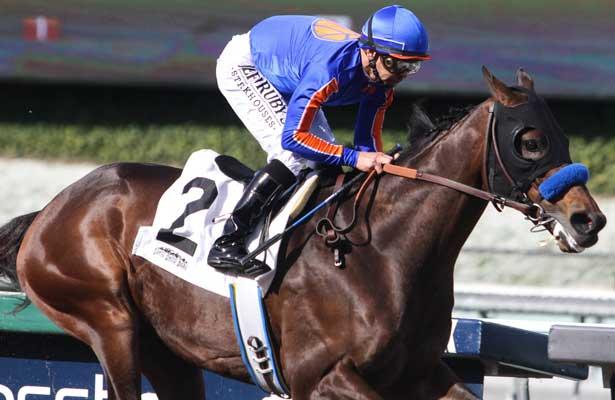 Five-million-dollar earner Game On Dude put in a sharp drill Monday morning at Del Mar in his final major move leading up to Sunday’s 23rd running of the $1-million TVG Pacific Classic. The likely favorite for the 10-furlong headliner stopped the clockers’ watches in :59.60 for five furlongs.

The 6-year-old gelded son of Awesome Again came onto the track at 8:05 a.m. following the mid-morning renovation break and, after backtracking to the sixteenth pole, jogged into his work with jockey Martin Garcia in the tack. In front of them by about seven or eight lengths was a “target” horse, the Baffert stable’s 6-year-old allowance winner Bank the Eight.

Game On Dude tracked his stablemate starting at the five-eighths, cut the margin to two lengths turning for home and drew even with him for the run through the stretch. “The Dude” had his head in front at the wire and galloped out strongly -- first for an extra furlong, then two.

“Good work and he needed it,” said trainer Bob Baffert afterwards as he took in the move from the Del Mar grandstand with one of the horse’s owners, Bernie Schiappa. “He’s been getting a little fresh on me lately and he needed this.” The trainer half-joked beforehand that he put Bank the Eight (who was given a five-furlong time of 1:01) in the mix so “He (Game On Dude) doesn’t get bored.” Clockers had Game On Dude making up seven lengths on his stablemate over the course of the work.

Right after the drill, Schiappa handed Baffert his cell phone so he could talk to another of the horse’s owners, baseball icon Joe Torre, who’ll fly from the east coast this weekend to see Game On Dude run.

Baffert has engaged Joel Rosario to ride Game On Dude in the TVG Pacific Classic, the first time the nation’s leading rider has been aboard the winner of 14 races and $5,002,158 in purses. Game On Dude was fourth in the 2011 edition of the race, then second in last year’s running. The trainer also indicated he’ll start a second horse in this year’s renewal, Arnold Zetcher’s multiple-stakes winner Liaison, and give Garcia a leg up as his rider.

A field of perhaps as many as 12 runners is shaping up for the Grade I headliner, which also is a Breeders’ Cup “Win and You’re In” race, allowing its winner free entry into the $5-million Breeders’ Cup Classic, which will be held this year at Santa Anita on Saturday, November 2. Entries for the TVG Pacific Classic will be taken this Wednesday morning and a post position draw will be held at the nearby Rancho Valencia Resort and Spa that evening.

Also on the work tab on an overcast Monday morning at the seaside track was the 4-year-old gelding You Know I Know, who races out of the barn of Del Mar’s current leading trainer, John Sadler. The son of the Silver Deputy stallion Simon Pure will be making his stakes debut in the TVG Pacific Classic and for his move Monday he had jockey Julien Leparoux in the saddle.

Sadler sent his horse out at about 6:15, then watched him cover five furlongs in :59.60, with a strong gallop out accomplished in 1:11.20. The stretch-runner’s official five-furlong time – the same as Game On Dude’s – was tied for third fastest of 54 works at the distance Monday morning.

“I’m very pleased with his work and he certainly seems to have a proclivity for this track,” said Sadler. “I’m going to see how he comes out of this work tomorrow and if all’s well, we’re going to take a shot at the big one.”

Sadler stated that Edwin Maldonado would have the mount Sunday. The rider was aboard when You Know I Know won a highly rated optional claimer going a mile on Del Mar’s main track August 3.

The TVG Pacific Classic will be the 9th race on an 11-race card Sunday at Del Mar with a special first post of 1 p.m. Post time for the big race should be approximately 5:45 p.m. Also on the program that day are the $250,000 Pat O’Brien Stakes at seven furlongs and the $200,000 Del Mar Mile on the turf course.