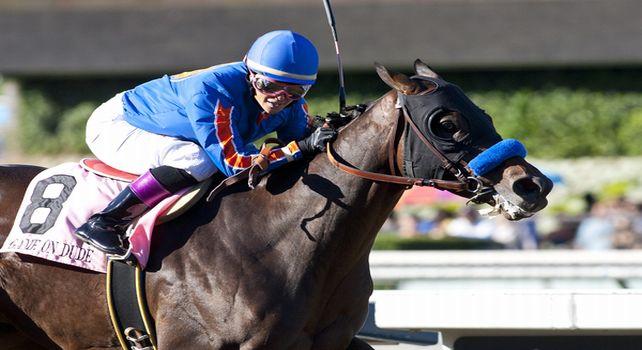 Leading Breeders’ Cup Classic candidate Game On Dude heads a deep, world-class roster of horses running at Santa Anita on Saturday in five Grade I Breeders’ Cup “Win and You’re In” stakes for those seeking to secure berths in the two-day Breeders’ Cup World Championships to be held Nov. 2 & 3 at Santa Anita.

Game On Dude drew the rail in the Awesome Again and will face eight rivals, all of whom are hoping to run in the $5 million Breeders’ Cup Classic at 1 ¼ miles on Nov. 3.

Trained by Hall of Famer Bob Baffert, Game On Dude won the 2011 Santa Anita Handicap and comes off a second-place finish, beaten a half-length as the 6-5 favorite in Del Mar’s Grade I Pacific Classic run on Polytrack Aug. 26.

Ridden by Chantal Sutherland in his last nine races, four of them victories, Game On Dude will be handled by Rafael Bejarano and will return to natural dirt on Saturday. Bejarano’s only previous try with “Dude” resulted in an allowance win at Santa Anita on January 27, 2011.

Game On Dude took full advantage of his inherent speed the last time he drew the rail, in the Grade II Californian at Betfair Hollywood Park on June 2. Sent to the lead by Sutherland, he crushed three rivals, winning by 7 ½ lengths at the Awesome Again distance of 1 1/8 miles.

Although the run to the first turn was shorter on Hollywood’s 1 1/8- mile main track, it would be no surprise to see Bejarano employ similar tactics on Santa Anita’s one mile oval Saturday. Game On Dude has a lifetime record of 19-8-5-1, with earnings of $2,844,658.

Richard’s Kid, who was a troubled third in the Pacific Classic, beaten 2 ¾ lengths by Game On Dude in his first start for new owners Kenney, Triple B Farms, Westside Rentals, et al and trainer Doug O’Neill rates a huge chance in the Awesome Again.

Like Game On Dude, Richard’s Kid gets a new rider on Saturday, as the multiple Eclipse Award winning Garrett Gomez will take over. Gomez has ridden the 7-year-old son of Lemon Drop Kid twice, winning the Grade II San Antonio Handicap at Santa Anita on Feb. 7, 2010, as well as splitting a 14-horse field in his next start, the 2010 Dubai World Cup.

It is expected that Richard’s Kid, who is three for seven going 1 1/8 miles, will get plenty of pace to run at, which could facilitate his late kick.

Jay Em Ess Stable’s Rail Trip, who ran an even fourth, beaten 4 ½ lengths in the Pacific Classic, will again get the services of jockey Jose Valdivia Jr.

Trained by Ron Ellis, Rail Trip and Valdivia sat close to the early pace in the Grade II San Diego Handicap at 1 1/16 miles on July 28, winning by a half-length.

Since returning to Ellis’ barn from New York this past spring, the 7-year-old Jump Start gelding has experienced a rebirth of sorts and has trained well at his Hollywood Park base since returning from Del Mar. His career record is 21-9-6-1, with earnings of $1,313,790.

Hall of Fame trainer Jerry Hollendorfer will send out the talented 3-year-old Nonios in the Awesome Again. A winner of Hollywood Park’s Grade III Affirmed Handicap at 1 1/16 miles on June 3, Nonios was subsequently second in the Grade II Swaps Stakes on July 4, second in the Grade I Haskell Invitational at Monmouth Park on July 29 and most recently fifth, beaten 3 ¾ lengths in the Grade I Travers at Saratoga on Aug. 25.

Possessed with good tactical speed, the son of Pleasantly Perfect will be reunited with Martin Pedroza, who rode him in both Hollywood Park starts. His record stands at 7-3-2-1, with earnings of $359,000.