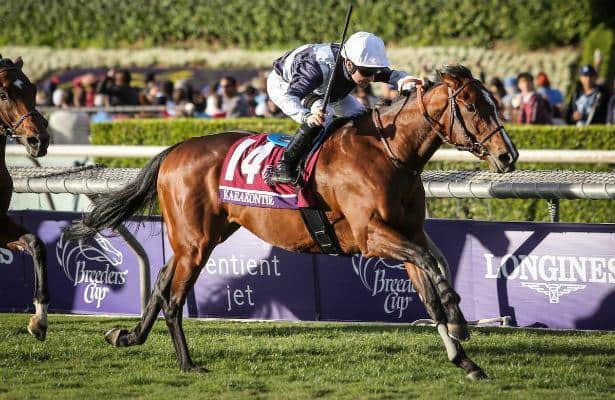 Photo: Zoe Metz/Eclipse Sportswire
Gainesway Farm announced their 2016 stallion roster and stud fees.
Afleet Alex - $12,500 LFSN
Afleet Express - TBD
Birdstone - $5,000 or complimentary for approved mares LFSN
Empire Maker - $100,000 LFSN
Hat Trick - $7,500 LFSN  / $10,000 Breed Secure
Karakontie - $15,000 LFSN
Tapit - $300,000 LFSN
Tapizar- $15,000 LFSN
To Honor and Serve - $15,000 LFSN / $20,000 Breed Secure
"We are very excited about Gainesway's 2016 stallion roster which offers a strong balance of proven and promising prospects. Tapit has set the standard of excellence in the industry, being the leading commercial North American-based Sire, as well as Champion Sire for the second year in a row. He is fast-emerging as one of the most influential breed-shaping stallions of the past half century or more," said Michael Hernon, Director of Sales at Gainesway.

Two new stallions to Gainesway in 2016 are Empire Maker and Karakontie. “Breeders' Cup Mile (G1) winner Karakontie strikes a strong resemblance to the Flaxman-bred Kingmambo, who hails from his immediate family. He was one of the best two year olds in Europe and Gainesway has had success with imported stallions that fit this mold. We are delighted to be partnering with the Niarchos family and Flaxman Holdings on this important young stallion prospect," added Hernon. “Empire Maker, already the sire of 11 G1 Winners and 4 Champions,  has a stellar pedigree and is emerging as a top class sire of Sires. Welcoming Empire Maker to the farm is especially meaningful as we launched the career of his sire, Unbridled, here at Gainesway. Going forward with Don Alberto Corporation as our partner in Empire Maker is very exciting."