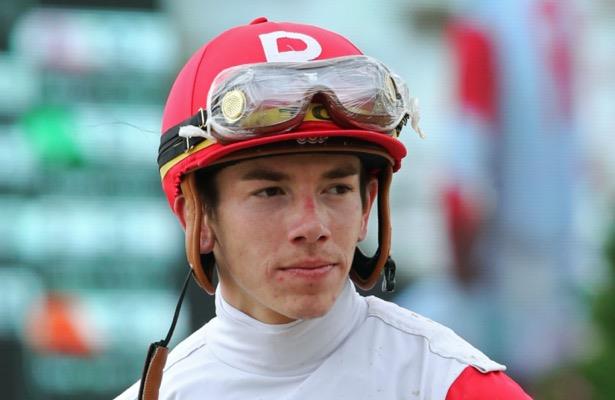 With two days remaining in the 27-day Spring Meet at Churchill Downs, 25-year-old Tyler Gaffalione is well on track to his second leading rider title at Churchill Downs with an eight-win cushion over 19-time local leader Corey Lanerie (30-22) in the jockey standings.

Gaffalione, a native of South Florida, began riding full-time at Churchill Downs during the 2018 Fall Meet and won the leading rider title by one victory over Brian Hernandez Jr. and Lanerie. Represented by Matt Muzikar, Gaffalione’s win-clip was a stout 21 percent prior to Saturday’s 11-race program where he was named to ride eight races.

“We’ve been so blessed to have such a successful meet,” Gaffalione said. “I can’t thank everyone enough for their support throughout the meet. It’s been an awesome two months and it was great to get back to Churchill.”

Some of Gaffalione’s notable winners included a comeback allowance victory aboard multiple Grade 1 winner Guarana in an allowance event June 4; a 1½-length allowance score aboard likely Blue Grass Stakes (G2) contender Man in the Can; and a one-length win aboard Field Pass in the Audubon Stakes. Gaffalione is scheduled to ride at Saratoga over the summer before returning to Kentucky for the September and Fall Meet.

In the race for the Spring Meet’s trainer and owner title, Brad Cox began Saturday with a 15-12 win margin over Steve Asmussen while Ken and Sarah Ramsey had a one-win lead, 4-3, over Calumet Farm, Maggi Moss, Steve Landers Racing, Wayne Sanders and Larry Hirsch and Gary and Mary West.

Racing will conclude Sunday with a nine-race program and a first post of 1 p.m. There will be a mandatory payout for all exotic wagers including the Single 6 Jackpot, which stood at $33,382 at the start of racing on Saturday. For free past performances, visit www.churchilldowns.com/handicapping.