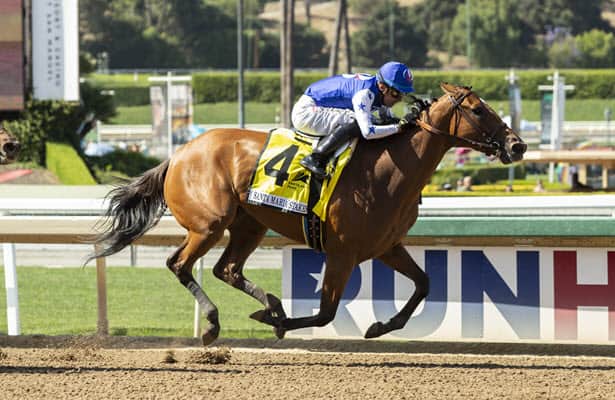 She’s back. Well beaten in her last three starts, Baoma Corp’s Private Mission broke sharply, pressed the early pace and kicked on through the lane as her connections had hoped in taking Saturday’s Grade 2, $200,000 Santa Maria Stakes at Santa Anita by three-quarters of a length.

Juan Hernandez, the leading rider at Santa Anita, collected his 102nd victory of the winter-spring meet.

Originally trained by the currently suspended Bob Baffert, Sean McCarthy handled the saddling duties today as the 4-year-old daughter of Into Mischief got a mile and one sixteenth in 1:43.46.

With Lady Mystify going to the front from her rail post under Edwin Maldonado, Private Mission sat second a length and a half back mid-way around the first turn. One length back at the half mile, Private Mission cruised up outside the pacesetter and had a one length edge straightening for home.

“She broke really sharp and as soon as she saw Lady Mystify in front of me, she relaxed and she was just waiting for me to ask her to go,” said Hernandez, who collected his meet-leading 23rd stakes win of the meeting.  “I’m really happy because I’m doing really well.  I just want to thank all the owners and trainers for supporting me.  I really appreciate it.  I just love to win and ride horses.”

A two-time graded stakes winner last year at age three, Private Mission, who was distanced three starts back in the Breeders’ Cup Distaff Nov. 6 and who was soundly beaten in a pair of sprints earlier this meet, the Grade 1 La Brea on Dec. 26 and the Grade 3 Las Flores on March 13, was nonetheless off as 7-5 favorite in a field of six fillies and mares and paid $4.80.

“I watched her break and it was perfect,” said McCarthy. “Private Mission had been training great and full credit to all the crew, Jimmy (Barnes) and everyone.  They have done a great job with her and she’s come along well…We passed a race up in New York to stay for this race, which ended up being the right decision…”

Blue Stripe, attentive to the pace, got a pocket trip while third approaching the quarter, swung three-wide and out-gamed McCarthy’s Varda for second money under Tyler Baze.  Considering the fact that Blue Stripe got quite a bit of dirt in her face throughout, she ran big race to hold Varda safe by a half length.

A winner of the Grade 2 Santa Margarita at a mile and one eighth on April 30, Argentine-bred Blue Stripe was the second choice at 8-5.

Varda, off at 9-1 and ridden by Drayden Van Dyke, was third.

The Santa Maria trophy was presented by legendary Hall of Fame jockey Eddie Delahoussaye.  In from Louisiana with his wife Juanita to visit family, “Eddie D.” sported a New Orleans Saints cap and received a rousing welcome from the crowd when introduced by track announcer Frank Mirahmadi.