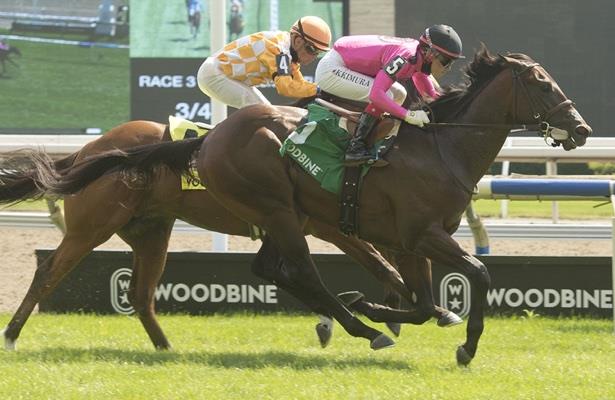 Juvenile Breeders' Cup prospects grab the spotlight at Woodbine on Sunday. The boys start things out in the $250,000 Summer Stakes (G1). Two races later, the girls take center stage in the $250,000 Natalma Stakes (G1). Both races will be run on the E.P. Taylor Turf Course at one mile.  Each race is a "Win-and-You're-In" with the winners receiving automatic entry into the Breeders’ Cup Juvenile Turf and the Breeders’ Cup Juvenile Fillies Turf respectively at Keeneland this fall.

Both races drew wide-open, competitive fields and we asked a slew of racing's experts for their insight and analysis to help sort out Sunday's big races.

There are a few shippers that look formidable on paper but let's begin with a local who is getting better each start with a famous name to live up to, Gretzky the Great.

His most recent win came on the E.P.Taylor Turf in the Soaring Free Stakes, confirming this son of Kentucky Derby-winning Nyquist, as a force to be reckoned with. The writing was on the wall in his debut, having placed second on the inner turf at the abbreviated distance of five furlongs. His subsequent maiden special weight win on the main track was a mere formality and over the 6-1/2 furlongs of the Soaring Free, he turned the tables on Ready to Repeat and then some.

Gretzky the Great has the benefit of experience over the track and is an exciting colt with a sharp turn of foot that is trending upwards. It will take a talented shipper to beat him.

Triple Crown hero, American Pharoah, is the sire of the Bill Mott trained, American Monarch who edged out the front-running favourite Secret Potion at Saratoga at the end of a stirring 1-1/16M on turf in a maiden special weight six weeks ago, having set tepid early fractions that day. Trained by Chad Brown, Secret Potion is by crack sire Into Mischief. Both he and American Monarch have shown that they can route.

The same can be said for Heat of the Night who was a mild upset winner when breaking his maiden in his debut over a mile on turf at Gulfstream Park off a stalking trip. Timothy Hamm is no stranger to shipping horses to Woodbine and will take his chances here with Heat of the Night who is a gelding.

Dolder Grand, the other Mark Casse runner who comes with a high purchase tag, ran a handy third in his debut to Download over seven-furlongs on the grass, closing some ground. The winner, Download, had struggled against stakes quality prior, the turf appearing to have moved him forward. Dolder Grand should improve off of that race but will need to as he is facing much tougher here.

The cross-entered, Ready to Repeat is a logical contender given his record but by the time this article goes to print, my hope is that trainer Gail Cox opted to run him in Saturday's Ontario Racing Stakes instead, a shorter trip on the inner turf to which an easily wound up juvenile as he is, looked better suited.

The rivalry between Alda and Dreaming of Drew, the top two finishers separated by a nose in the six-and-one-half furlong Catch A Glimpse Stakes will be renewed in this race on the stretch out to the mile. It was a tough loss for Dreaming of Drew who put away her stubborn, early speed opponent Illegal Smile, only to be nabbed at the wire by Alda who flew home from the tail of the field. Alda, who shipped in from Belmont for trainer Graham Motion, has only ever raced on the turf. The runner-up, Dreaming of Drew, showed her trainer Barbara Minshall that she is suited to both surfaces and now seeks revenge.

Another solid local hope is Lady Speightspeare, who in similar vein to male counterpart and stablemate, Shirl's Speight, made quite the impression in her debut with a powerful 3 3/4 lengths win at seven-furlongs on the E.P.Taylor Turf. Trainer Roger Attfield and owner Charles Fipke bring high quality bloodstock to Woodbine and Lady Speightspeare appears to have quite the engine given the authoritative manner of her win a month ago.

Saratoga shippers are always reason to prick the ears up, with both Seasons and Stunning Princess sporting proven route form. Trained by James Toner, Seasons, a daughter of Tapit, overcame her greenness to score as the hot favourite at a mile and a sixteenth in her debut from a stalking position. That style should be effective here.  Drawn to her inside, Stunning Princess, by Cairo Prince, is a well-credentialed maiden for the barn of Danny Gargan, having been runner-up in each of two tries at 1-1/16M, beaten a nose last time out.

Trainer Mark Casse is represented by Sleek Lynx who ran a game second at the mile on turf at Gulfstream Park after interference in deep stretch. She closed good ground on that occasion and seems well-bred for turf being by War Front from a Montjeu dam.

Rounding out the field is local runner Big Big Plans, who destroyed rivals for a low claiming tag in her debut at 5-1/2 furlongs. The barn of Nick Gonzalez has been enjoying a strong meet but this transition in class, surface and distance look like a tall order.

Dolder Grand did not live up to the hype in his debut finishing a decent 3rd with a wide trip. These juveniles can change so quickly and he could take a much needed step forward with one under his belt. His price will not be 8/5 and I'll peg him as a bounce back proposition with solid interim works in tow.

Alda was impressive in her local debut switching lanes late and still getting up to win the Catch A Glimpse. I think she'll relish the added distance, and will get speed to run at. I think Bahen will have her stalking the pace and he better keep Lady Speightspeare in his sights. Alda to book her ticket to Keeneland!!

In the Summer, I like the # 5 American Monarch. Trainer Bill Mott seems to be winning with his two-year-olds all over the country at the moment. Bill has won this stake twice before. He will have some tough competition from the Chad Brown trained # 2 Secret Potion and #3 Gretzky the Great trained by Mark Casse. Gretzky the Great was the first stake winner from Nyquist! My play: exacta 5/ 2-3-4 and trifecta 4-5/ 2-3-4-5-6/ 2-3-4-5-6.

American Monarch is one of 3 that have run a distance of ground and that can be advantageous for the exotics.

Lady Speightspeare hails from the Attfield barn and worked in 58.60 on the training track turf. She has not shown her full potential yet and should be a decent price to the two favorites.

Dreaming of Drew has really been working well and has had a work on the E P Taylor. I think she is peaking and will love the stretch out.
Alda should be a deserving favorite but how short of a price will you take.
I will be boxing Lady Speightspeare and Dreaming of Drew in an exacta.
Alda Gretzky The Great Woodbine Summer Natalma Natalma (2020) Summer (2020)