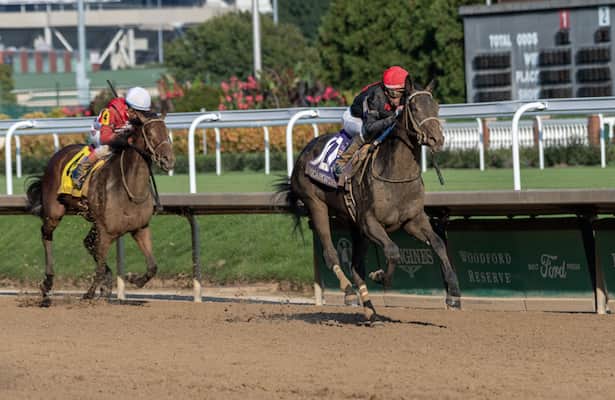 Lucky Seven Stable’s Fun and Feisty, winner of the Pocahontas (G3) at Churchill Downs going 1 1/16 miles in her most recent start, and D. J. Stable’s Wonder Wheel, runner-up in the Spinaway (G1) at Saratoga, headline a field of 14 2-year-old fillies entered Tuesday for Friday’s 71st running of the $500,000 Alcibiades (G1).

Get Paddock Prince picks for the full Keeneland meet

The Alcibiades serves as the centerpiece of Friday’s 10-race program that begins at 1 p.m. EDT and kicks off the 17-day fall meet that runs through Saturday, Oct. 29. The Alcibiades will go as the ninth race with a 5:16 p.m. post time.

A winner of two of four starts, Fun and Feisty is trained by five-time Alcibiades winner Kenny McPeek, whose most recent victory in the race came in 2020 with Simply Ravishing. Julien Leparoux, a two-time  Alcibiades winner, has the mount Friday and will exit from post position nine.

Wonder Wheel, a winner of two of three starts including the Debutante at Churchill Downs in July, is trained by three-time Alcibiades winner Mark Casse, whose most recent winner in the race was Heavenly Love in 2017. Tyler Gaffalione, who has been aboard for all of Wonder Wheel’s starts, has the call Friday from post position one.

Three other fillies that ran in the 7-furlong Spinaway are in the field Friday: third-place finisher Kaling, owned by Eclipse Thoroughbred Partners and trained by Todd Pletcher; Valene Farms’ Sabra Tuff, who finished fifth for trainer Dallas Stewart; and Clarkland Farm’s Just Cindy, who finished sixth for trainer Eddie Kenneally.

*Rating is based on HRN fan votes, which rank the Top Active Horses in training.
Wonder Wheel Fun And Feisty Alcibiades Alcibiades (2022)