Full Salute returns to the grass in Showing Up 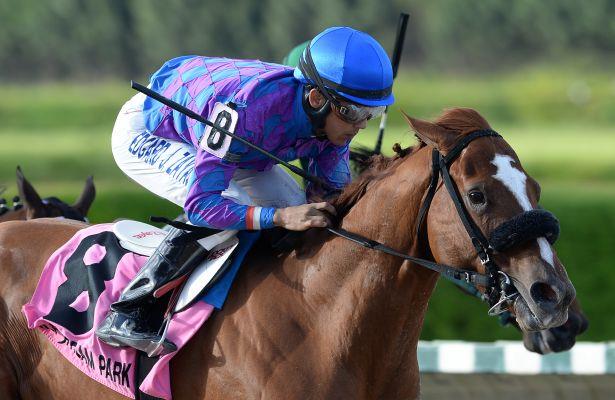 Morris Bailey’s Full Salute, a multiple stakes winner on turf and dirt, exits a pair of graded stakes for his return to the grass in Saturday’s $75,000 Showing Up at Gulfstream Park West.

The Showing Up for 3-year-olds, along with the $75,000 Cellars Shiraz for 3-year-old fillies, both run at one mile, are the first two of 12 stakes worth $1.125 million during the Fall Turf Festival Meet which opened Oct. 5.

Full Salute finished off the board in both the Jersey Shore (G3) and Gallant Bob (G3) dirt sprints, the latter Sept. 24 at Parx in his most recent start. He has had three half-mile breezes since joining trainer Eddie Plesa Jr.’s string in mid-October at Palm Meadows, Gulfstream Park’s satellite training facility in Palm Beach County.

“He’s coming into the race excellent or I wouldn’t be putting him in there. He’s been training good, and he seemed to acclimate well to the different [climates]. He’s won on the turf and he’s won on the dirt, so he’s pretty versatile. He’s been a pretty good horse for us.”

The Showing Up will be only the third career try on grass for Full Salute, who was second in the Tyro Stakes last summer and won the Select Stakes in June, both turf sprints at Monmouth Park. Last fall he won the 6 ½-furlong Hall of Fame at Parx and the six-furlong Buffalo Man at Gulfstream Park West, both on dirt.

“He had a little bit of a break between his last race and this race and I think it benefitted him. Hopefully I’m correct and we’ll see it on Saturday,” Plesa said. “He’s been a competitive horse and at a  higher level than most horses. It’s just nice to have him in the barn.”

Full Salute’s only previous attempt at the mile distance came in the Sapling Stakes last fall at Monmouth, where he stalked the lead from the gate and finished second by 2 ¼ lengths to subsequent Grade 3 winner Sunny Ridge.

Nik Juarez will ride from Post 6 of seven at 121 pounds.

“I wouldn’t want him to go a whole lot farther, but I think the mile he can handle,” Plesa said. “It just depends on the jock and the pace of the race. He doesn’t have to be on the lead and he doesn’t need a slow pace to get his best effort. He’s pretty good in that sense. He just brings his game and it doesn’t matter what they do, he’ll be there and he’ll give a good effort.”

Another stakes winner in the field is Clark Ohrstrom’s Franklin Towers, who went all the way on the lead to hold off favored Noble Quality by a neck at odds of 20-1 in the 1 1/16-mile Lamplighter July 23 at Monmouth.

The City Zip gelding has lost two starts since then, last time out racing on the lead for six furlongs before tiring to eighth, beaten less than four lengths, in the 1 1/8-mile Commonwealth Derby (G2) Sept.24 at Laurel Park.

“Those horses were just too tough for him, really. It was a bit of a stretch but sometimes you need to try these things,” trainer Jane Cibelli said. “He’s doing very well and training very well, which kind of prompted me to put him in there.”

Franklin Towers has two wins and two seconds from nine starts this year, breaking his maiden going 1 1/16 miles June 10 at Monmouth. He has worked once at Palm Meadows since arriving late last month.

“I think a mile is actually better for him. I thought the mile and a sixteenth was a bit of a reach for him but Monmouth’s course kind of favors speed and we were fortunate because he got loose on the lead and had everything his own way,” Cibelli said. “I wasn’t going to run but I looked at the [nominations] and I felt like he fit with these horses. If he runs back to his Monmouth race he’s right there, so I figured I’d take a shot.”

Jonathan Gonzales has the call from Post 2 at 121 pounds.

Keystoneforvictory, winner of Gulfstream’s Forty Niner Stakes in June; Mr. Kisses, second to Awesome Banner in both the Prized and Foolish Pleasure divisions of the Florida Stallion Series this summer; stakes winners Copingaway and Two Step Time; and Saluation complete the field.

Off to a sizzling start at the Fall Turf Fesitval Meet with six wins from 20 starts, including three in two days last weekend, trainer Todd Pletcher will take two shots in the $75,000 Cellars Shiraz with Deedeezee, making her stakes debut, and Heavenly View.

A full field of 14 was entered for the Cellars Shiraz with Deedeezee breaking from Post 7 under Eddie Castro and Jonathan Gonazles riding Heavenly View from Post 13.

Starlight Racing’s Deedeezee has yet to win in three lifetime tries on grass, with one second and two thirds. The daughter of Congrats most recently was a front-running winner of a 1 1/16-mile entry-level allowance at Gulfstream Park West that was rained off the turf to a sloppy, sealed main track.

Siena Farm’s Heavenly View has not raced since finishing sixth but being  placed fifth in a second-level optional claiming allowance going 5 ½ furlongs July 27 at Saratoga. Also by Congrats, she broke her maiden in her grass debut Feb. 21 at Gulfstream Park and followed up with a head victory at Keeneland in her first try against winners. She was off the board in both the Edgewood (G3) and Wild Applause Stakes prior to her most recent effort.

Cibelli will take a shot at the top pair with Panic Stable’s Bodacious Babe, a daughter of Mineshaft that has finished in the top three in six of eight starts but will be making her turf debut. She hasn’t run since being beaten as the favorite in a second-level optional claiming allowance Sept. 27 at Parx going one mile.

“She’s never been tried on the turf and I’m not sure that she’s really a turf horse, but I wanted to try her on the turf and see what she does with it. We’ll experiment a little bit and see if she improves any,” Cibelli said. “She seems like she handled two turns well the last time she ran. She hooked a speed horse and it took two horses to beat her that day. She got tired a bit that last eighth of a mile but she’s training well.”

“She’s coming to the end of her 3-year-old year so everything changes for her next year. If you can get some black type on these types at this age it increases their value,” Cibelli said. “The last time she ran in a stake she got hit in the eye. I don’t know if it was a part of the track or what but it’s why she was off for so long. It was quite serious; she had to go to the clinic and it was the reason she ran poorly that day.”

Robert S. Evans’ Dream Prospect takes a three-race win streak into the Cellars Shiraz, her stakes debut. She made three starts at Tampa Bay Downs for trainer Christophe Clement, breaking her maiden in March over a sloppy, sealed main track and taking an entry-level optional claiming allowance on turf May 6. Another Mineshaft daughter, she didn’t return until scoring in a second-level optional claiming allowance going 1 1/16 miles at Parx Oct. 18, a race also rained off the turf.